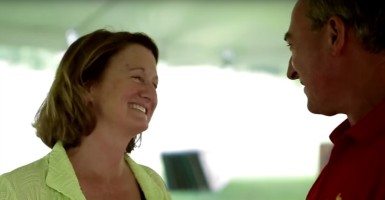 Cynthia and Robert Gifford, owners of Liberty Ridge Farm in New York, choose not to appeal their case. (Photo: The Daily Signal)

Cynthia and Robert Gifford, the owners of a small farm in upstate New York who were ordered to pay $13,000 for refusing to host a same-sex wedding ceremony, chose to end their legal battle with the state of New York on Tuesday.

Of the decision, their lawyer, James Trainor, told The Daily Signal the lawsuit had taken “its toll” on the family.

“We looked at the road ahead, we saw that we had an uphill climb, and I think the Giffords wanted to get on with their lives—as committed as they are to the cause,” Trainor, an allied attorney with Alliance Defending Freedom, said. “It took its toll on them as a family and a business.”

In January, an appellate division with the New York Supreme Court ruled that in declining to host a wedding ceremony for a same-sex marriage at their family owned farm, the Giffords unlawfully discriminated based upon sexual orientation. The Giffords have now decided against challenging that ruling.

That decision upheld an earlier ruling handed down by the New York Division of Human Rights in 2014, where an administrative law judge for the state fined the Giffords $10,000 and ordered them to pay the couple, Melisa Erwin and Jennifer McCarthy, $1,500 each. The judge, Magdalia Pares, also ordered the Giffords to implement “anti-discrimination training and procedures.”

Melisa Erwin and Jennifer McCarthy have since married at a different location.

Cynthia and Robert Gifford are the owners of Liberty Ridge Farm in Schaghticoke, N.Y., about 30 miles north of Albany. They live full-time at the farm and occasionally open their home for public events like fall festivals and private weddings and receptions.

Their legal battle has been ongoing since 2012, when, citing her Christian beliefs about marriage, Cynthia Gifford told Melisa Erwin and Jennifer McCarthy that they couldn’t host their wedding at Liberty Ridge Farm.

At the time of the refusal, Cynthia Gifford did not know that the phone call was being recorded.

Trainor said the Giffords faced a difficult legal climate in New York—a state that he believes is “wed” to its Human Rights Law.

“New York is pretty wedded to its Human Rights Law and finding discrimination where they can, so that probably makes it more difficult of a climb here in New York than some places elsewhere,” Trainor said, adding:

[B]ut I think it’s a difficult climb throughout the country right now, particularly in light of recent rulings in New Mexico and Colorado—the photographer case and the baker case.

In 2013, the Supreme Court of New Mexico ruled that a Christian photographer does not have the right to decline to take pictures of a same-sex commitment ceremony because of her religious beliefs. More recently, the Colorado Court of Appeals ruled that Masterpiece Cakeshop must bake cakes for a same-sex wedding, despite the baker’s Christian view on marriage. In Oct. 2015, the baker, Jack Phillips, and his attorneys at Alliance Defending Freedom asked the Colorado Supreme Court to review that decision.

Trainor said the Giffords are now in the process of figuring out how they can operate their business in accordance to the law and their religious convictions and said that it’s likely the couple will have to rework some of its business practices.

The Daily Signal reached out to the New York Civil Liberties Union, which is representing Melisa Erwin and Jennifer McCarthy in the lawsuit, for comment.

Trainor added that although they chose against pursuing their case, the Giffords “haven’t changed their mind in this whole thing.”

“This is still very near and dear to their heart, and they still feel very strongly about their religious convictions and their right to be able to exercise their religious liberties through their work,” he said. “It’s just unfortunate that the climate is such that our state and the federal government don’t allow us to do that.”