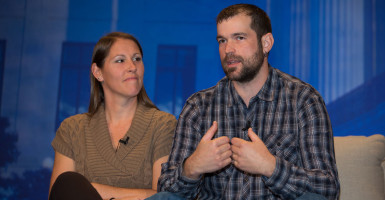 Melissa and Aaron Klein opted to pay the state fine while they appeal the ruling. (Photo: Jeff Malet/The Heritage Foundation)

The Oregon bakers who refused to bake a same-sex couple’s wedding cake have paid over $135,000 in fines.

The bureau “was attempting to charge interest rates of 9 percent, equating to $35 a day, and seeking to garnish any assets of the Kleins so they couldn’t earn interest on the money that had been donated to them,” Tyler Smith, an attorney for the Kleins, told The Oregonian.

Those supportive of the Kleins have raised over $500,000 for the family on crowdfunding pages.

Fox News reports that the labor bureau wiped out the family’s bank accounts earlier this month by confiscating an additional $7,000 from the couple.

“The least expensive option to stay in compliance with the law was to pay the Oregon Bureau of Labor and Industries funds that will be kept in a separate account until they prevail in their court appeal,” Smith said, according to Fox News.

The $135,000 fine, for emotional damage to Laurel and Rachel Bowman-Cryer, was ordered by Labor Commissioner Brad Avakian in July, after the lesbian couple filed a complaint with the labor bureau in February 2013.

The Bowman-Cryer complaint came a month after the Kleins chose not to bake the lesbian couple’s wedding cake. The Kleins stood by their religious belief that marriage is between a man and a woman and were found in violation of an anti-discrimination law.

Oregon’s accommodation law, in part covering places that provide goods and services, bans discrimination based on a person’s sexual orientation.

The Kleins had originally been ordered to pay the $135,000 fine by July 13—a date the couple had no plans to pay the fine by (calling the situation an “overreach of the government”).

The Kleins were also threatened with a lien placed on their house if they did not pay the fine.

They had requested a stay of enforcement to delay payment until after the Oregon Court of Appeals could weigh in on the case. Avakian—who led the court order charge against the Kleins—rejected the request two times, The Oregonian reports.

Critics have taken to calling the Kleins “bigots” and “homophobes” for their view on marriage.

“We’re looking at the persecution of Christians in this country,” Aaron Klein told TheBlaze in July.