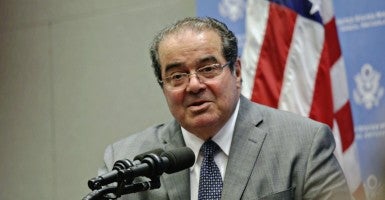 Scalia’s revolution led to a generation of law students, lawyers, and judges who interpret the Constitution as it was written; and not how they wish it was written. (Photo: Eric Bridiers/ZUMA Press/Newscom)

George Mason University has announced it will rename its law school after the late Supreme Court Justice Antonin Scalia. This stands in stark contrast to Georgetown Law Center, which sadly was embroiled in controversy over whether to even mourn the passing of this conservative legal icon. As an alumna of George Mason Law, I am proud that my school will bear the name of and carry on the legacy of a great man and exemplary judge.

Scalia will be remembered among the handful of justices who made a lasting impact on the law, such as the Great Chief Justice John Marshall, whose leadership of the Supreme Court in its early years truly made it a co-equal branch of government with Congress and the president, and Justice Joseph Story, whose Commentaries on the Constitution inform the way we think about constitutional principles to this day.

In his nearly thirty years on the Supreme Court, Scalia helped bring about a revolution in constitutional and statutory interpretation. When he arrived at 1 First Street, NE in 1986, legislative history was considered more instructive than the text of a statute for determining its meaning. Likewise, a majority of justices thought they should weigh policy options as though they were legislators charged with deciding what the law ought to be, rather than judges who determine what the law requires.

Scalia thought otherwise. Along with champions of originalism and textualism including Ed Meese, Clarence Thomas, Robert Bork, and others, Scalia believed that the Constitution and laws should be interpreted based on their actual text and original public meaning.

This caused a huge shift in the law. To give just one example, in District of Columbia v. Heller (2008), Scalia, writing for the majority, found that the Second Amendment recognizes the right of individuals—not just militias— to keep and bear arms for self-defense. Looking at dictionaries, treatises, and other sources from the time when the Second Amendment was drafted, Scalia worked out the meaning of each word and phrase contained within the amendment. He concluded:

Undoubtedly some think that the Second Amendment is outmoded in a society where our standing army is the pride of our Nation, where well-trained police forces provide personal security, and where gun violence is a serious problem. That is perhaps debatable, but what is not debatable is that it is not the role of this Court to pronounce the Second Amendment extinct.

What is remarkable about this case is that even the dissenting opinion by Justice John Paul Stevens looked at the history and text of the Second Amendment. Though four justices would have reached a different conclusion, all nine agreed that the meaning of the Second Amendment should be derived from looking at the common law tradition and what influenced our Founding Fathers when they wrote that language, rather than solely modern policy considerations about the safety of guns.

Justice Ruth Bader Ginsburg, a longtime friend and frequent sparring partner, called Scalia the “grand master in life and law” and praised George Mason for the change. In a statement, she said:

Justice Scalia was a law teacher, public servant, legal commentator, and jurist nonpareil. As a colleague who held him in highest esteem and great affection, I miss his bright company and the stimulus he provided, his opinions ever challenging me to meet his best efforts with my own. It is a tribute altogether fitting that George Mason University’s law school will bear his name.

Scalia’s revolution led to a generation of law students, lawyers, and judges who interpret the Constitution as it was written; and not how they wish it was written. George Mason University joins in helping this legacy flourish with its decision to rename the law school the Scalia School of Law.

In a press release, law school Dean Henry Butler said of Scalia, “As a professor and jurist, he challenged those around him to be rigorous, intellectually honest, and consistent in their arguments.” What better virtues could be taught to the next generation of lawyers?