The NFL’s Bullying of Believers 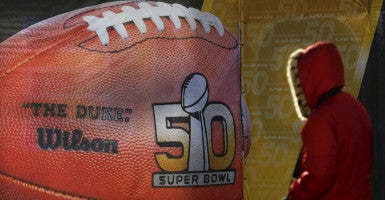 If so, cheers: The National Football League basically thinks you’re a bigot.

A CBS News/Associated Press story Sunday, headlined “NFL warns state of Georgia over ‘religious freedom’ bill,” reported that “the NFL acknowledged that the religious exemptions bill … could have an impact on the selection process for the championship game in 2019 and 2020.” Atlanta is one of four cities up for the next two Super Bowls.

Yes, because who wants the Super Bowl in a state where some random clergy member may not be forced to perform a gay wedding? That would totally wreck the ambiance of…a sports game.

The bill in question, now on the desk of Gov. Nathan Deal, a Republican, is embarrassingly limited. I’m not exaggerating: The bill’s applications to religious liberty are so minor that it likely wouldn’t even protect Catholic nuns like the Little Sisters of the Poor, who are currently in a legal fight to not be forced by the federal government to offer health care that includes contraceptives and abortion-inducing drugs.

And according to my Heritage Foundation colleagues Ryan T. Anderson and Roger Severino, the Georgia bill “provides no protection for bakers or florists or other similar wedding professionals who cannot help celebrate a same-sex wedding” because of their religious beliefs.

In other words, Georgia residents like the Kleins (the Oregon bakers fined $135,000 for refusing to bake a cake for a lesbian wedding), the Giffords (the New York couple fined $13,000 for declining to host a gay wedding at their family farm), and Barronelle Stutzman (the Washington state florist in a legal battle over her refusal to provide flowers for a gay wedding) wouldn’t be protected by the proposed law at all.

In fact, this bill’s protections for believers are so minimal that in theory even top Democrat Rep. Debbie Wasserman Schultz should be able to support the bill.

But the NFL is geared up to lecture anyone who thinks religious liberty matters.

“NFL policies emphasize tolerance and inclusiveness, and prohibit discrimination based on age, gender, race, religion, sexual orientation, or any other improper standard,” spokesman Brian McCarthy said in a statement, adding that the NFL may evaluate “whether the laws and regulations of a state and local community are consistent with these policies” when looking at Super Bowl contenders.

Yes, because tolerance and inclusiveness require making sure people of faith who don’t support same-sex marriage have no freedom to live in accordance with their beliefs.

Nor is the NFL the only big businesses weighing in against believers.

“We urge Gov. Deal to veto the discriminatory legislation headed to his desk and send a clear message that Georgia’s future is one of inclusion, diversity, and continued prosperity,” said Apple in a statement. Hundreds of companies are part of Georgia Prospers, a coalition that told The New York Times that the bill “could harm our ability to create and keep jobs that Georgia families depend upon.”

What would they even have left to say if Georgia had actually moved to substantially protect the consciences of believers?

There is no doubt that lesbian and gay Americans have not always been treated with the civility and respect they deserve throughout our history. And that is a shame. But the answer is not now to force those who have deeply held moral beliefs about the nature of marriage to act against their consciences.

And in fact, the Georgia bill could also help protect the consciences of LGBT residents, such as by allowing a college founded by those who believe that same-sex marriage is a moral necessity to decline to hire professors who disagreed.

Like the NFL, I believe in tolerance. But unlike the NFL, I think that means recognizing that in our lawsuit-crazy era, that means sometimes giving legal protections to people who want only to be allowed to live in accordance with their consciences.

Ultimately, if the NFL were serious about limiting the Super Bowl to states and local areas that promote “tolerance,” that would mean the NFL should look to hold Super Bowls only in states with religious freedoms.

Unfortunately, it looks as if football fans can join Apple users and others in realizing that the businesses they once loved are now working vehemently against them—and their beliefs.