Is the AP U.S. History Exam Changing Because of Common Core? 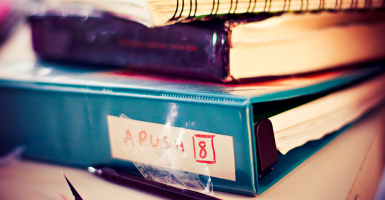 Can the redesign of AP exams, such as AP U.S. History, be attributed to Common Core? (Photo: Creative Commons)

As with much of K-12 education, Advanced Placement exams are affected by Common Core.

Certain AP courses are being redesigned to better match the Common Core standards. That raises questions about the reach of Common Core in disciplines beyond the original English and Math standards outlined and the standards’ influence on higher education.

The redesign of AP exams, such as AP U.S. History, is “one outgrowth” of the College Board’s effort to reform its curriculum and exams to reflect Common Core, argues Joy Pullmann in The Federalist.

The American Association of School Administrators (AASA) notes that:

The College Board is responding to the brewing changes of today’s Common Core era by revising the Advanced Placement program so that the focus is on fewer concepts and more depth…The College Board is removing extraneous details from the AP course requirements and making AP classes less about simple memorization and more about critical thinking and synthesizing information.

Notably, AASA writes that “the College Board may offer an AP Algebra course (although no plans are definite), which may supplant AP Calculus, particularly in schools rigidly adhering to Common Core standards.” Such a shift would seem to underscore the assessment of Stanford professor emeritus of mathematics James Milgram, who has stated that “in Common Core, mathematics stops with Algebra II.” Milgram warns:

Algebra II is absolutely minimal preparation, even to go to college. For example, one of the things they tout for Common Core is that it will improve the STEM pipeline. Well, the actual data is this: if you came to college with only an Algebra II background and you wanted to major in a STEM area, you have a 1/50 chance— a 2 percent chance— of ever obtaining a degree in STEM… This level of preparation is simply insufficient.

At the American Association of School Administrators’ 2013 national conference, College Board senior vice president Trevor Packer said that, through “a parallel process,” AP exams in history and science are adopting similar methodology to the Common Core. “The work that is happening in the Common Core will help students prepare for what they will encounter in these redesigned AP courses,” said Packer.

According to the College Board, “The redesigned AP U.S. History course emphasizes developing students’ ability to analyze historical texts and to support their written responses using valid reasoning and relevant evidence. This emphasis dovetails with the Common Core State Standards for reading and writing literacy in history.”

Coauthors Ralph Ketcham, Anders Lewis, and Sandra Stotsky, explain in a recent Pioneer Institute report entitled, “Imperiling the Republic: The Fate of U.S. History Instruction under Common Core,” that there is little, if any, research to support the method Common Core writers adopted in promoting cross-discipline education. Stotsky, professor emerita at the University of Arkansas and former Common Core validation committee member, said:

Common Core dramatically reduces the amount of classic American literature and poetry students will read in favor of non-fiction or so-called ‘informational texts.’ Consequently, the writers of the national standards attempted to shoehorn little bits and pieces of decontextualized U.S. History texts into the English standards. The simultaneous result damages instruction for both English and U.S. History classrooms.

According to the report, AP U.S. History’s redesign applies the same reading strategies as the Common Core English standards, which may cause historical illiteracy due to its “’cold’ or ‘close’ (non-contextualized) reading of historical documents like the ‘Gettysburg Address’.”

Criticisms of changes at the College Board in reaction to Common Core have not been limited to AP exams. When David Coleman— cofounder of Student Achievement Partners, the organization which took a leading role in Common Core’s creation— joined the College Board in 2012 as president, he ushered in a series of changes, including a redesign of the SAT to better reflect the content of the Common Core national education standards.

The alignment of college entrance exams such as the SAT and ACT to Common Core raises questions about the impact the national standards will have on the broader definition of “college readiness.”

“It used to be that the ACT would do what the colleges demanded of it. Suddenly the ACT is going to do… what the K-12 system demands of it. Same with SAT,” explains former U.S. Department of Education official Ze’ev Wurmann.

This increases the likelihood that private school students and home schooled students will have to follow the Common Core sequence if they want to be competitive on these redesigned exams.

The realignment of college entrance exams and AP exams suggests what many opponents of Common Core have argued since the beginning of the push: Common Core is having a homogenizing effect on education, diminishing higher education institutions’ ability to define “college readiness” and ultimately, limiting options for students.