Obama’s War on Coal Is Driving Up Energy Costs 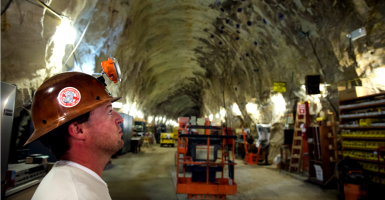 Opening access America’s natural resources and reducing the regulatory burden that carry exorbitant costs and little to no environmental benefit will ensure coal has the potential to be an affordable, reliable energy supply long into the future. (Photo: Manny Crisostomo/TNS/Newscom)

Andrew Wilford is a member of the Young Leaders Program at The Heritage Foundation.

The one thing the president really needs to do now is to begin the process of shutting down the conventional coal plants. Politically, the White House is hesitant to say they’re having a war on coal. On the other hand, a war on coal is exactly what’s needed.

The president’s war is working.

According to a recently released report by the Energy Information Administration (EIA), more than 80 percent of the nearly 18 gigawatts of electric generating capacity retired in 2015 was conventional steam coal. This represents 4.6 percent of the nation’s coal capacity at the start of 2015.

The Energy Information Administration gives two primary reasons for the recent decline in coal. First is that companies have switched fuel because of the abundance of inexpensive natural gas from fracking. The other reason for coal’s demise is much more problematic: burdensome regulations devoid of any significant direct environmental benefit.

One such regulation is the Environmental Protection Agency (EPA)’s Mercury and Air Toxic Standards rule, which went into effect in April of 2015. A study done by National Economic Research Associates included indirect costs and found the rule has an economic cost of $25.6 billion per year.

The EPA credits this regulation with 30 percent of coal retirement in 2015. The rule requires approximately 600 facilities to cut mercury emissions by a substantial amount. The EPA predicted that this rule will have an annual cost of $9.6 billion to the U.S. electricity sector—what’s worse is that other studies have estimated an even more significant effect.

The Energy Information Administration’s recent report is not the first indication that coal has been on the decline.

A study of the years 2008-2012 found that the coal industry shrank by almost 50,000 jobs. The future does not bode well, either, unless Congress decides to act.

The EPA has placed global warming regulations on power plants that would make it extremely difficult to build a new coal-fired power plant in America. And the agency’s Clean Power Plan could continue the push to drive out the country’s existing coal fleet.

The administration’s attack on the coal industry has come from agencies as well.

The Department of the Interior recently announced a prohibition on leasing of public land to coal companies while it “reviews” the leasing process (a procedure that will inevitably result in making it more difficult and more expensive for coal companies to lease federal land).

As for the potential benefits, the EPA is notorious for overestimating the environmental gains from these regulations.

They estimated that the Mercury and Air Toxic Standards rule would produce up to $90 billion per year in environmental benefits. However, the direct benefits of the regulation, the mercury reductions, would produce a mere $6 million in benefits.

The EPA generates such a larger figure by including co-benefits covered by existing regulations already on the books. This means that 99.996 percent of the supposed benefits have nothing to do with mercury reduction.

The problem with all of this is that an increase in energy prices essentially functions as a regressive tax, as higher energy costs affect low-income households disproportionately, because these households spend a higher percentage of their budgets on energy costs.

Though some of economic damage caused by the administration’s coal regulations cannot be undone, Congress and the next administration can and should reverse course. America has nearly five centuries’ worth of coal under its soil.

Opening access to America’s natural resources and reducing the regulatory burden that carries exorbitant costs and little to no environmental benefit will ensure that coal has the potential to be an affordable, reliable energy supply long into the future.