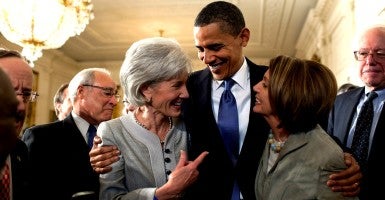 Obamacare, a partisan product full of broken promises, is six years old. Burdened by mounting problems, it’s not mellowing with age. Notwithstanding the president’s notorious promise, millions of Americans have lost their health care plans, and, for those faced with narrowing provider networks, their choice of doctors is also shrinking.

If you were eagerly awaiting reduced health insurance costs, or a reprieve from middle-class taxation, or secure access to future Medicare benefits, you can forget that.

Washington lobbyists’ power and influence have grown, as Obamacare has become a poster child for the triumph of special interest politics—just as its opaque regulatory regime has become an engine of crude political favoritism.

If you were eagerly awaiting reduced health insurance costs, or a reprieve from middle class taxation, or secure access to future Medicare benefits, you can forget that.

More than six years ago, President Barack Obama promised that his reform would cut typical family costs by $2,500 annually. In 2014, when the law went fully into effect, folks buying plans in the “exchanges” were rattled by rate shock.

HealthPocket, a firm comparing rates and benefits, projects an average 12-percent premium increase in exchanges this year. Ordinary Americans will soon find out.

The president promised that he would not sign a tax increase on the middle class. But the bulk of Obamacare’s gaggle of taxes (more than $832 billion over the next ten years) is passed onto middle-class individuals and families—either directly or indirectly.

This includes the taxes on insurance, drugs and medical devices, and even the 40-percent excise tax on “high value” health plans. The Congressional Budget Office (CBO) says that as many as 20 percent of all workers could be impacted by that excise tax in 2025. And even the new 3.8-percent Medicare payroll tax on “rich” persons making over $200,000 a year, will, over time, reach 80 percent of all taxpayers, as the Medicare Trustees report.

And speaking of taxes, the president boldly insisted that the individual mandate penalty—which he opposed while running for office—was not a tax.

His lawyers argued that it was a tax. In 2012, the Supreme Court agreed with the president’s lawyers. No matter. CBO says that 69 percent of the penalty will be paid by persons making less than 400 percent of the federal poverty level, or $47,080.

The law’s health insurance subsidy program is a mind-numbing mess. If you make more than $47,080, you don’t get a taxpayer subsidy to offset your rising premium costs. And if you do, you might not get the right amount and end up indebted to the feds. In 2014, an estimated 50 percent of exchange enrollees owed money back to the government.

Beg your boss to keep that plan you like.

The president insisted that the law’s Medicare payment cuts would not harm seniors. But the Medicare Trustees, responsible for reporting on the program’s financing, tell a different story:

“By 2040, simulations suggest that approximately half of hospitals, 70 percent of skilled nursing facilities and 90 percent of home health agencies would have negative total facility margins, raising the possibility of access and quality of care issues for Medicare beneficiaries” (emphasis mine).

What We’re Left With

Six years ago, former House Speaker Nancy Pelosi, D-Calif., told America that if we passed Obamacare, we would find out what was in it “away from the fog of the controversy.”

We sure did. Today, taxpayers are forced to fund abortion, while federal officials are obsessed with violating Americans’ personal freedom of conscience and restricting their religious liberty.

The president’s broken promises have multiplied over the past six years, and now we’re faced with rising costs; bigger middle-class tax bills; and a partisan product bedeviled by boondoggles, design flaws, and unworkable provisions. In 2017, we can, and must, do better.