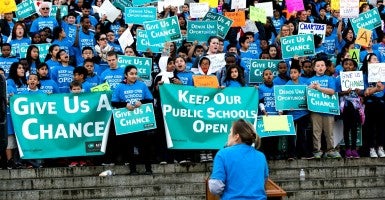 These families can breathe a little easier now that the Washington legislature has found a new funding source: Charter schools in Washington will now be funded by lottery revenue, pending the signature of Democratic Governor Jay Inslee.

Pressure from teachers unions against charters in the state has added to the sectors’ hassle. The Washington state teachers’ union lobby fought endlessly to ensure that all public funds be given only to traditional public schools.

The president of the Washington Education Association, Kim Mead, said about the Supreme Court decision, “Instead of diverting taxpayer dollars to unaccountable charter schools, it’s time for the Legislature to fully fund K-12 public schools so that all of Washington’s children get the quality education the Constitution guarantees them.”

However, as Rick Hess has written, the Washington Supreme Court not only broke with the precedent set by six other states that faced similar legal battles, but has ignored the mountains of evidence that charter schools improve the academic outcomes of students. Over one million children are currently on waitlists for charter school enrollments, indicating overwhelming parental approval.

A recent study of the Knowledge is Power Program (KIPP) schools show:

… students make substantial academic progress when they attend a KIPP school instead of the district school to which they would have otherwise been assigned. The results from KIPP and other charters provide strong evidence that disadvantaged students can indeed learn if they are provided with high quality schooling.

Charter schools are in high demand from parents and improve the quality of education for children who attend. Public funds for education should follow children to schools that parents have deemed best equipped to help their child flourish. A K-12 system that funds institutions, rather than individual children, serves only to perpetuate the cycle of restricted education options and limits the ability of children to succeed.

While lottery revenue will now fund Washington charter schools, states should work to ensure that all funding is student-centered and portable to follow students to schools that meet their unique learning needs.

Public financing of K-12 education should not be restricted to government schools. Such a model does a disservice to the families of Washington State and hinders the type of education innovation that is long overdue.