Liberals Told Senators ‘Do Your Job’ on Court Nominee. What the Constitution Says. 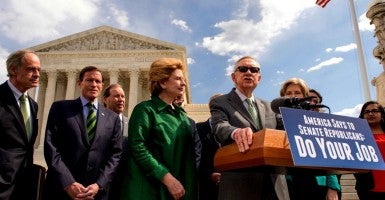 You would have to go all the way back to 1888 for the last time an election-year nominee was confirmed under divided government, as we have now. (Photo: Perisha Gates/ZUMA Press/Newscom)

Following President Barack Obama’s nomination of Chief Judge Merrick Garland of the D.C. Circuit to fill the vacancy left by sudden passing of Justice Antonin Scalia, there has been an intense clamor from the left for the Senate to “do your job!”

By this, they mean that the Senate has a constitutional obligation to give Garland a hearing and an up-or-down vote, which Senate Republicans have announced they are not going to do. But is the Senate obligated under the Constitution to do so?

The answer is clearly “no.”

The president “shall nominate, and by and with the Advice and Consent of the Senate, shall appoint … Judges of the supreme Court ….” That’s all Article II, Section 2 of the Constitution says about the confirmation process for justices to the Supreme Court of the United States.

The Senate can, if it so chooses, “do its job” by withholding its consent and advising the president that it will not consider any nominee to fill this vacancy until after the forthcoming election.

Then Sen. Joe Biden, D-Del., had no doubt that the Senate could “do its job” by refusing to consider a nominee for the Supreme Court.

He made that point crystal-clear in 1992 when President George H.W. Bush was in office when he said:

The Senate … must consider how it would respond to a Supreme Court vacancy that would occur in the full throes of an election year. It is my view that if the president goes the way of Presidents Fillmore and Johnson and presses an election-year nomination, the Senate Judiciary Committee should seriously consider not scheduling confirmation hearings on the nomination until after the political campaign season is over.

Sen. Chuck Schumer, D-N.Y., clearly had this same understanding when he announced a year and a half before the end of the George W. Bush administration that the Senate should not confirm any nominee to the Supreme Court should a vacancy occur until after the next election.

The duties of the Senate are set forth in the U.S. Constitution. Nowhere in that document does it say the Senate has a duty to give presidential nominees a vote. It says appointments shall be made with the advice and consent of the Senate. That is very different than saying every nominee receives a vote.

And, of course, then Sen. Barack Obama D-Ill., certainly felt he was doing his job when he helped to lead a filibuster against the nomination of Samuel Alito—in other words, an effort to deny him an up-or-down vote—to the Supreme Court, something he now says he regrets.

You would have to go all the way back to 1888 for the last time an election-year nominee was confirmed under divided government, as we have now.

According to the non-partisan Congressional Research Service, out of the 160 men and women whose names have been submitted by presidents to the Senate for consideration for positions on the Supreme Court, 36 were not confirmed, and 25 of those did not receive a vote.

You would have to go all the way back to 1888 for the last time an election-year nominee was confirmed under divided government, as we have now.

In that year, Democratic President Grover Cleveland nominated Melville W. Fuller to be chief justice, who was confirmed by a Senate in which the Republicans had a two-vote majority. Suffice it to say that, in marked contrast to earlier times, today, two facts are obvious: The Supreme Court plays a far more active role in deciding issues that were formerly resolved by the people through the democratic process, and the confirmation process is far more politicized—both developments Scalia decried.

What the Senate chooses to do is, of course, up to the Senate. But those who are now saying that by choosing not to schedule a hearing for Garland, the Senate is not “doing its job” or is otherwise failing to carry out a constitutional obligation are dead wrong.