The Real Alexander Hamilton Was No Liberal 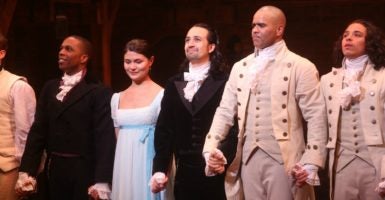 Alexander Hamilton is often credited with being the most far-sighted of the founders, since he, more than anyone else, saw America’s potential to become a manufacturing and commercial powerhouse among the nations.

Not even a man of Hamilton’s vision, however, could have foreseen that he would one day be the subject of a hit stage musical—let alone one set to hip-hop music. Two centuries after his meteoric rise from poverty and obscurity to the highest levels of the founding generation’s leadership class, Hamilton is a star again—this time on Broadway.

What are conservatives to make of Hamilton’s newfound fame? Some—following Thomas Jefferson, who regarded Hamilton as a subverter of limited government—might be tempted to regret it.

In all these efforts to get Congress to exercise its powers energetically, he was opposed vehemently by limited-government men like Thomas Jefferson and James Madison. It would be understandable, then, if contemporary conservatives were to ask: “Why can’t we have a musical about Jefferson or Madison?”

Conservatives who are tempted to think this way should take a closer look at Hamilton’s career.

As I argue at greater length in a new essay entitled “Alexander Hamilton and American Progressivism,” Hamilton was not a proto-progressive. Nor was he the progenitor, wittingly or unwittingly, of the kind of expansive central state that modern liberals support in their quest to achieve social justice.

He was instead a pragmatic conservative statesman, seeking to build a government and economy that would make America an independent, prosperous, and powerful nation.

Hamilton’s conservatism is evident, in the first place, in the way he argued for institutions like the national bank and bounties for America’s infant manufacturing sector.

Unlike a contemporary progressive, he favored these things not because they were new or innovative. On the contrary, he advocated them precisely on the conservative ground that they had been tried, and their usefulness proven, in other countries.

Successful commercial and manufacturing nations, he observed, had national banks and had taken some steps to encourage the development of their nascent domestic manufactures.

Hamilton’s conservatism is also evident in the ends he had in view in advocating such policies.

And why not? Because of inequality. Most Americans had adequate health insurance, but some didn’t.

This is not the kind of thinking that informed Alexander Hamilton’s statesmanship. Indeed, Hamilton was accused by his political enemies of being an aristocrat. Those charges were unjust, but they certainly could not have been made if he had dedicated his public efforts, like a contemporary liberal, to the pursuit of an ever greater equality of conditions.

The end Hamilton had in mind in advocating his policies was instead the prosperity, power and prestige of the nation—within which enterprising individuals and families could work effectively to better their condition.

A Government Can Be Both Limited and Energetic

Nor should contemporary conservatives reject Hamilton because of his call for an energetic national government. This call was consistent with the purposes of the American founding and not a betrayal of them. The Constitution was written and ratified, after all, because the government of the United States was too weak, unable to pay its bills and defend the country.

The aim of the Constitution, then, is to create a government that is both energetic and limited. And Hamilton’s career reminds us that this is what we should want: a government that energetically executes its proper functions but does not go beyond them.

It is true that Hamilton was accused by Jefferson and Madison of pushing the powers of the national government beyond their proper limits. His response to such charges showed a proper respect for the Constitution that is often lacking among contemporary progressives.

Hamilton replied to these accusations by arguing that his policies were in fact justified by a correct interpretation of the Constitution. He certainly did not respond by suggesting, as contemporary liberals sometimes do, that the Constitution could be ignored because it is supposedly inadequate to the needs of a dynamic and changing nation.

In sum, the debate between Hamilton and his opponents was a debate over how to understand the limits on government imposed by the Constitution, not a debate about whether those limits should be respected.

Hamilton and the Other Founders

And while he sought to shore up the national power because he thought this was what the infant republic needed to achieve stability, he admitted that the states were an essential part of America’s constitutional scheme and that they would serve as a salutary check on the power of the federal government.

The state legislatures, Hamilton argued in Federalist No. 26, would act as “not only vigilant but suspicious and jealous guardians of the rights of the citizens against encroachments from the federal government.”

Above all, Hamilton accepted and unswervingly defended the natural rights doctrine that informed the founding, a doctrine that contemporary conservatives are called upon to defend as well.

For Hamilton, as much as for Jefferson and Madison, governments were instituted to protect the rights of individuals, including their right to acquire property—even unequal amounts of property.

As the statesman charged with finding a way for America to pay its war debts, Hamilton made the right of private property one of the guiding principles of his plan to restore the public credit. He never suggested that the government could escape its debts by repudiating them, thus violating the property rights of the debt holders.

On the contrary, he insisted that “the established rules of morality and justice are applicable to nations as well as to individuals” and “that the former as well as the latter are bound to keep their promises, to fulfill their engagements,” and “to respect the rights of property.”

Broadway’s “Hamilton” is, of course, less about Hamilton’s political thought than it is about his remarkable life. Here, again, conservatives should rejoice at his new prominence in the public mind. Hamilton’s life is an amazing testimony to what can be accomplished by talent and hard work in a free and open society.

If anyone was born disadvantaged, it was young Alexander Hamilton. His childhood was marked by his illegitimacy, his father’s abandonment of the family, and his mother’s untimely death.

Hamilton responded to these setbacks not with despair or fatalism, but with a determination to make something of himself, to advance his position in the world. He certainly succeeded, becoming General Washington’s most trusted aide and organizer and the lead writer of The Federalist Papers, as well as the nation’s first and most consequential Secretary of the Treasury.

Hamilton, moreover, advanced himself not by the low arts of popularity, but instead by his willingness to master the details of the work that had to be done on behalf of the public.

Young Alexander Hamilton, while serving in the Continental Army, carried with him a copy of Malachy Postlewayte’s “Universal Dictionary of Trade and Commerce.” While serving his country, he used his spare time to prepare himself to serve it even better by mastering what he would need to know to manage its financial affairs.

Contemporary conservatives need not agree with everything Hamilton said or did. They can and should, however, admire his virtues and be grateful for his contribution to the creation of the America we have inherited. They can therefore rejoice to find his name in lights.