Domestic Use of Military Drones Is No Big Deal. Here’s How It Works. 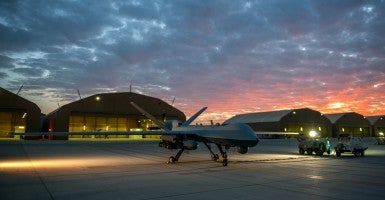 None of the missions were “spying” on anyone. All the missions were in legitimate and legal support of other organization in the U.S. governmental system. (Photo: U.S. Air Force photo by Tech. Sgt. Robert Cloys/Released)

Between 2006 and 2009, the Department of Defense participated in some 20 instances where its various unmanned aerial systems (drones) were used to provide reconnaissance over domestic territory in support of other government agencies, according to a recent USA Today story. This story was prompted by the release of a new Freedom of Information Act (FOIA) request.

The title of the article, “Pentagon Report Justifies Deployment of Military Spy Drones Over the U.S.,” implies that not only did the Department of Defense spy within the domestic territory of the U.S., but that it “justified” it with a report.

This is just poor journalism. None of the missions was “spying” on anyone. All the missions were in legitimate and legal support of other organization in the U.S. governmental system. No one’s rights were abridged.

The Department of Defense regularly executes a category of mission it calls within its doctrine “Defense Support of Civil Authorities,” or DSCA.

This most often occurs in the form of high water-capable trucks in flooded areas; helicopters to rescue stranded citizens from roofs; or just manpower to deliver food, water, and medical care to disaster areas. Occasionally, certain technologies are available only in the Department of Defense’s inventory.

If a civilian agency needs such a capability, it requests it, and if it is available, the Department of Defense is proud to be a part of the effort to help American citizens.

Most often this is seen when there is a widespread disaster (think Hurricane Katrina, or Super-storm Sandy). In situations like that, the ability of a military drone to loiter for extended periods of time (20+ hours) and search for victims in need is a powerful capability.

Another example, which happened right after Sept. 2001, was when the Department of Defense worked to assist in locating the D.C. snipers. This would not be in the new report because it occurred outside the FOIA request window of 2006-2009.

An early lead in the case (that turned out to be erroneous) was that the culprits were in a white panel van. Given the massive number of white vans potentially in the greater D.C. area, the FBI asked for some help before anyone else died. They turned to the Department of Defense and asked for the use of a Predator drone to help spot white vans.

Since the Department of Defense is prohibited by law from conducting surveillance against U.S. citizens in American territory, the secretary of defense, who wanted to be helpful, said yes but asked the attorney general of the United States to figure out how it could be done legally.

The procedure developed was to have the operator “fly” the drone but have an FBI agent, who, with a warrant (which they had), can do surveillance sitting at the video screen and who took custody of all the tapes. No military personnel ever had the ability to view them.

Some might ask, why such silliness? When lives are at stake, just take the action.

The heads of the federal departments do not lightly cross such lines. None of the examples in this most recent report crossed any.

Let’s hope that not many will take a bad headline out of context and wrongfully assume that the Department of Defense has been spying on U.S. citizens in America.

Nothing is farther from the truth.