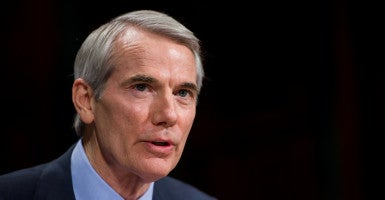 Top Obamacare officials told a Senate panel Thursday that they can’t guarantee that the government ever will recover billions of taxpayer dollars loaned to health insurance “co-ops.”

“Today’s hearing is about the families who lost their health care plans, it’s about the taxpayers who were swindled, it’s about the bureaucrats who mismanaged this program, and it’s about the local governments who had to cut budgets from firefighters and schools to make up for Washington’s failures,” Sen. Ben Sasse, R-Neb., said.

During the hearing, held by the Permanent Subcommittee on Investigations within the Senate Homeland Security and Governmental Affairs Committee, senators paid particular attention to the 12 of 23 Obamacare co-ops that have failed.

The Affordable Care Act, popularly known as Obamacare, created consumer-oriented and operated plans (co-ops) as a public option for health care. The Department of Health and Human Services awarded $2.4 billion of taxpayer money in the form of startup and solvency loans to the 23 nonprofit co-ops.

Kevin Counihan, CEO of HealthCare.gov, the government’s online health insurance exchange set up by Obamacare, also testified during the hearing. Counihan, deputy director of the Centers for Medicare and Medicaid Services, which oversees Obamacare, told the subcommittee:

The team at CMS has the charge to specifically oversee the federal loans made to these startups with the goal of maximizing the return to taxpayer funds, supporting the co-ops so that consumers have access to uninterrupted, competitive insurance coverage, and providing information to state departments of insurance so they can make the best possible decisions about the future of the co-ops in their state.

When questioned, Andy Slavitt, acting administrator for the Centers for Medicare and Medicaid Services, said it’s “too early to say” whether co-ops will repay any of the taxpayer-backed loans.

“These failed co-ops were a costly experiment gone wrong, and real people got hurt,” Sen. Rob Portman, R-Ohio, chairman of the Permanent Subcommittee on Investigations, said.

Over the last nine months, our subcommittee has carefully investigated these failures. We wanted to know whether HHS, when it played the role of investor, made good or bad decisions with taxpayer money. Unfortunately, what we found out is that a lot of bad decisions were made.

When co-ops collapsed, 740,000 residents of 14 states lost their health insurance provider. The 12 failed co-ops also received a total of $1.2 billion in taxpayer dollars that they may never repay.

Portman presented a new report on the failure of the co-ops, released Thursday by the subcommittee’s Republican staff, at the hearing.

“In my view, it is unlikely they will pay any significant fraction back,” Portman said. “The latest statements show that the failed co-ops’ non-loan liabilities exceed $1.13 billion—which is 93 percent greater than their reported assets, including money they expect to receive. On top of that, they owe $1.2 billion to the federal government. We should not hold our breath on repayment.”

The Centers for Medicare and Medicaid Services’ Slavitt listed three “potential” sources of funds: claims still coming in, a series of receivables, and lawsuits and judgments with contractors and vendors.

Under questioning by Sasse, Slavitt said he could not guess what percentage the government expects to recover of the $1.2 billion in taxpayer loans to the 12 failed co-ops.

“Obviously we don’t expect 100 percent recovery or anything close to that, but we are expecting that between those sources and the strategies that they pursue, that there will be funds recovered for the taxpayers,” Slavitt said.

“Very little, if any, of the $1.24 billion in federal startup and solvency loans to establish those co-ops will be repaid, and at least several will be unable to meet all of their obligations to policyholders and health care providers,” Scott Harrington, professor and chairman of the Health Care Management Department at the University of Pennsylvania’s Wharton School, testified.

“But despite getting regular reports that co-ops were hemorrhaging cash, HHS took essentially no corrective action for over a year,” Portman said:

Worse, the department approved additional loan awards to three of the now-failed co-ops. This happened in 2014. This was despite clear warnings that these co-ops did not have reliable plans for turning things around.

CoOportunity Health, which operated in Iowa and Nebraska, collapsed after one year in operation.

On Dec. 16, 2014, when people were signing up for 2015 coverage, the Iowa insurance commissioner placed CoOportunity under a supervision order, Sasse said.

“One month later, in January of last year, the Iowa insurance commissioner said that rehabilitation of CoOportunity would be impossible and he sought a court order for liquidation.”

Slavitt acknowledged that CoOportunity should not have entered the 2015 market.

To help pay for CoOportunity’s unpaid claims, insurers in Nebraska were assessed fees totaling about $47 million last year alone. … This means that my state will have much less revenue to pay for priorities like education, roads, firefighters, and other local government issues. Thus, Nebraskans are going to have to pay for the CoOportunity failure again. First as individuals became uninsured, and now as taxpayers have to bail out CoOpportunity on top of the $145 million that they as taxpayers made in federal loans to CoOportunity.