Nancy Reagan Was a First Lady for the Ages 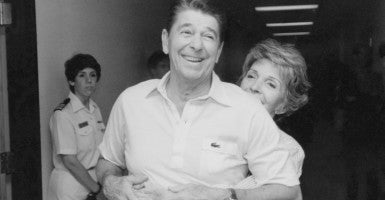 Nancy Reagan was a model of dignity, grace, and poise, a first lady for the ages. (Photo: File/UPI/Newscom)

Not since John and Abigail Adams in the early years of the Republic was there a first couple like Ronald and Nancy Reagan, so perfectly joined in heart and mind and soul. He said more than once that he could not imagine life without her.

She was his closest and most influential adviser in matters of personnel.

She was his closest and most influential adviser in matters of personnel. When she felt that someone was not serving her husband well or was putting his own interests ahead of the president’s, she pushed—sometimes hard—for his removal.

She was, in biographer Lou Cannon’s words, “the bad cop” who protected Reagan from his too trusting nature. It was Nancy who led the campaign for the removal of White House Chief of Staff Donald Regan, who badly mishandled the Iran contra affair.

My wife Anne and I first met Nancy Reagan in the fall of 1965, when I was writing a magazine profile of her husband, who was considering running for governor of California. They invited us up to their house overlooking Hollywood to have iced tea and cookies.

The first thing you noticed about her were her beautiful, luminous eyes that seemed to draw you in as well as her warm, melodious voice.

Years later, I was one of several experts and scholars, including George Shultz and Ed Meese, who participated in a 1999 seminar on the fall of the Berlin Wall at the Reagan Presidential Library. Nancy made a point of reaching out and making me feel welcome. I treasure a handwritten note from her thanking me for my Reagan biography.

Nancy Reagan was ever at her husband’s side—in the White House, at the Reagan Ranch, on political trips foreign and domestic, and during the long decade following his diagnosis of Alzheimer’s.

Nancy Reagan was a model of dignity, grace, and poise—a first lady for the ages.