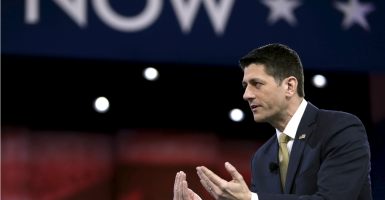 House Speaker Paul Ryan called Thursday for a change of strategy in the nation’s 52-year-old War on Poverty. The Wisconsin Republican said he wants to empower communities, not the federal government, to wage their own battles for economic opportunity.

Ryan renewed his anti-poverty campaign by taking aim at a legion of “about 92 federal programs, spending $800 billion a year” that he said make up “the poverty trap.”

“We’re trapping people in poverty,” Ryan argued, “by basically paying people not to work. We need to make it so work always pays.”

Speaking just outside Washington at the Conservative Political Action Conference, or CPAC, Ryan offered a familiar and poll-tested message when he blamed systemic poverty on an incompetent bureaucracy.

President Johnson declared the War on Poverty in January 1964, when the Democrat began to marshal the government to the task. In the five decades since, taxpayers have spent about $22 trillion on a failed cause, Heritage Foundation researchers conclude, since the poverty rate is largely unchanged and families have splintered.

“Not only does the federal government not know what it’s doing,” Ryan said, “it thinks it knows what it’s doing. When it does, it actually does more harm than good in many cases.”

To make his point, the House speaker ran the numbers for a metaphorical single mother.

“If she get’s a raise, she’ll lose 80 cents to the dollar. So she doesn’t. If she goes to work, she loses benefits.”

Ryan said he wants to recruit new officers from civil society who will take the lead in fighting poverty. That’s a tactic, he said, that “the left misunderstands so profoundly.”

“There is this space between ourselves and government.” Ryan said. “It’s called civil society. It’s community. It’s where we live our lives.”

Clarifying his vision, he noted that there is still a place for the federal government: It should “provide resources” and should “man the supply lines but not the front lines.”

The policy wonk from Wisconsin partnered with the American Enterprise Institute and Opportunity Lives to visit poor neighborhoods of rural and urban communities throughout the country. Ryan touted success stories he saw on that tour, pointing to former members of the Bloods and Crips gangs who now work to rehabilitate heroin addicts and combat gang violence.

Ryan called for a new measure of success.

“We have this thing called a cost benefit analysis, which the Obama administration ignores,” the self-described tax nerd quipped. “What we’re saying is, let’s measure how regulations affect the poor, the out of pocket costs, the take home pay of people.”

Since picking up the speaker’s gavel in October, the Wisconsin Republican House has made welfare reform part of his promise to deliver a bold election year agenda. Last month, he appointed a task force to explore “poverty, welfare, and economic opportunity.”

GOP leadership says they want to adopt a $1.07 trillion budget so Congress can begin the appropriations process and pursue entitlement reform through the reconciliation process. Conservative members of Congress want to scrap that number for a lower budget.

For the House speaker, 2016 so far has been about highlighting the differences between Republicans and Democrats.

“We care about restoring the American ideal, and that is the condition of your birth doesn’t determine the outcome of your life,” Ryan said. “We are the only country founded on that idea.”

Running through Saturday, CPAC offers conservatives across the country an opportunity to gather with fellow activists and leaders for speeches, panels, exhibits, and other activities at Gaylord National Resort and Convention Center at Maryland’s National Harbor.