EPA Inadvertently Makes Case Against Its Own Power Grab 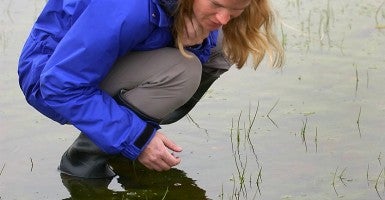 Jaymee Marty, an uplands ecologist with The Nature Conservancy, and others look for samples from a vernal pool as part of a tour by the Federal Environmental Protection Agency of Sacramento County. (Photo: Sacramento Bee/Jose M. Osorio)

It appears the Environmental Protection Agency has inadvertently admitted it is engaging in an end-run around the regulatory process to push through its overreaching water rule.

On April 21, 2014, the EPA and the United States Army Corps of Engineers proposed a rule that redefines what types of waters are covered under the Clean Water Act. As proposed, the definition is overbroad, giving the agencies jurisdiction over almost any type of water.

For example, the new proposed rule would regulate all ditches, except in narrow circumstances. The rule would apply to tributaries that have ephemeral flow. This would include depressions in land that are dry most of the year except when there’s rain. The rule is so vague property owners probably should assume a water body is covered under the law, unless it falls under one of the limited exceptions in the rule.

The substance of the rule should be a major concern, but the process used to develop the rule is also disturbing. The EPA has developed a report called the “Connectivity of Streams and Wetlands to Downstream Waters: A Review and Synthesis of the Scientific Evidence.” According to the EPA, “This report, when finalized, will provide the scientific basis needed to clarify CWA jurisdiction, including a description of the factors that influence connectivity [of streams] and the mechanisms by which connected waters affect downstream waters.”

The EPA published the proposed rule before this report was finalized. As has been argued, the report should have informed the content of the proposed rule. By not waiting, the public was commenting on a proposal that didn’t take into account the “scientific basis needed to clarify CWA jurisdiction.”  The public wasn’t given a meaningful voice in the process.

By not waiting for the final report before developing the proposed rule, the EPA is making the policy decisions look like a foregone conclusion. If this type of process is allowed, agencies could develop proposed rules with limited support and then use reports and studies after the fact to validate what the agency already has proposed.

Last week, the EPA announced the release of the final report in a fact sheet. At the end of the document it states:

Now final, this scientific report can be used to inform future policy and regulatory decisions, including the proposed Clean Water Rule being developed by EPA’s Office of Water and the U.S. Army Corps of Engineers. [Emphasis added]

It’s great the EPA recognizes the report should inform the proposed rule. The problem is the EPA has no way to go back in time and actually do so.

There’s a solution that doesn’t require time travel and does exactly what the EPA suggests should have been done in the first place. The proposed rule needs to be withdrawn, so the report can be taken into account and the public given an opportunity to adequately comment—not that this comes close to addressing the serious problems created by this proposed rule.

To properly address this water grab, Congress needs to prohibit implementation of the proposed rule. This process problem is just another reason to do so. The EPA and Corps will continue to try and expand their power beyond what is allowed under the law. Congress, not the agencies, needs to reassert its power and define what waters are covered under the Clean Water Act.