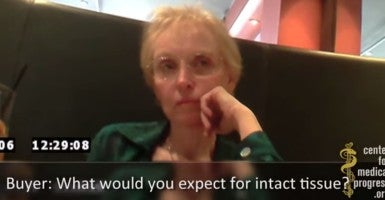 After a series of undercover videos produced last year by pro-life activists raised questions about Planned Parenthood’s harvesting of fetal tissue from aborted babies, lawmakers in Washington, D.C., attempted to address the issue of whether or not the practice is legally and ethically permissible when used for medical research.

The topic was debated on Wednesday in a House hearing called “Bioethics and Fetal Tissue,” led by Committee Chairwoman Marsha Blackburn, R-Tenn.

“The weak, the vulnerable, those with no voice—harvested and sold—there is something going on, something that deserves investigating and that demands our best moral and ethical thinking,” Blackburn said at the start of the hearing.

After the undercover Planned Parenthood videos raised questions about the group’s abortion practices, Republicans formed a special investigative panel charged with getting “the facts about medical practices of abortion service providers and the business practices of the procurement organizations who sell baby body parts.”

Before the hearing’s first witnesses even spoke on Wednesday, Democrats called for the select panel, which they referred to as “partisan and dangerous witch hunt,” to be dismantled.

“The unfortunate truth is that this partisan pursuit of the manufactured, false allegations of anti-abortion extremists is putting Americans in harm’s way, and it must stop,” ranking member Jan Schakowsky, D-Ill., said in her opening statement. “It is time to turn our attention to ensuring—not attacking—critical medical research and women’s access to health care.”

Democrats also attacked Blackburn for her decision to issue subpoenas to the University of New Mexico, Southwestern Women’s Options, and StemExpress after they failed to cooperate with the Republican-led investigation.

Because of Blackburn’s decision to issue subpoenas that include personal information, Rep. Jerrold Nadler, D-N.Y., said the panel could be “complicit with physical assaults or murders of these people.”

According to a report by the Washington Post, Blackburn requested “the names of all employees and students ‘who perform or assist in performing abortions or conducting fetal tissue research.’”

Blackburn defended her decision and an attempt to quash the subpoenas was defeated. In all of the documents released Wednesday, the names of students and/or employees were redacted.

The six witnesses who testified before the committee—four of whom disclosed their stance against abortion—all attempted to address the following questions:

When debating the issue of fetal tissue procurement, members of the select panel fell along party lines. Republicans voiced concern over the legal and ethical issues of procuring tissue from aborted babies, specifically citing consent issues, arguing that mothers who opt for abortion are incapable of providing consent because they doesn’t have the child’s best interest in mind. Democrats argued that since abortion is legal, women should be given the opportunity to donate that tissue to help save “millions” of lives.

One of the witnesses, G. Kevin Donovan of the Georgetown University School of Medicine, argued that it’s “disingenuous” to say millions of lives could be saved by vaccines developed via the tissue of aborted babies.

Alta Charo, a law and bioethics professor at the University of Wisconsin who was called to testify by the ranking member, said blocking fetal tissue procurement could hinder research into vaccines and cures, citing the Zika virus as an example.

Donovan argued that using tissue from aborted babies is “unnecessary” and that “fetal cells could be obtained by miscarriages.”

Several Republicans, including Maryland Rep. Andy Harris, a physician, said they fully support using fetal tissue obtained by miscarriages because it doesn’t involve the deliberate destruction of a human life.

Several Democrats, including New Jersey Rep. Bonnie Watson Coleman, suggested that discarding fetal tissue instead of donating it for research is immoral.

“Do you think it is moral to throw it away rather than use it for medical purposes?” the congresswoman asked.

Donovan said there’s an ongoing discussion within the bioethics community about “what do we do with the products of medical research when we think the research itself is tainted.”