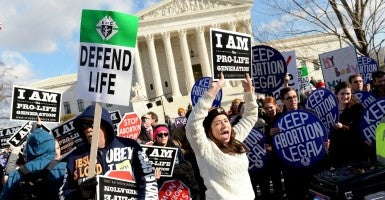 The regulations are completely reasonable and include requirements like retaining adequate staffing, having soap dispensers, and other basic sanitary requirements. (Photo: Abaca Press/Sipa USA/Newscom)

Kerri Kupec is the legal communications director for the Alliance Defending Freedom.

There have been many over-the-top liberal reactions to the 2013 Texas law known as House Bill 2. Some have even gone so far as to call it a “a calamity for all women.”

But this legislation is anything but. It actually protects the health and safety of women through requiring abortion facilities to meet the same health and safety standards as ambulatory surgical centers and requiring doctors performing abortions to have admitting privileges at a local hospital in the event a woman must seek hospital care due to post-abortion complications.

Yes, you read that right. All the hysteria is about a women’s health safety law. Abortion activists and facilities, including an abortion chain called Whole Woman’s Health, are fighting the law at the U.S. Supreme Court, with oral arguments scheduled for this week on March 2.

There are other components to House Bill 2, but the Supreme Court is looking only at whether the health and safety requirement described above should stay or go. These are requirements that three federal appellate judges—two of them women—said made sense in their unanimous decision affirming the Texas law, making an exception for one facility in a rural area.

Shouldn’t it be obvious that medical professionals and facilities that perform abortions should be as safe as possible and held to the same health and safety practices as health clinics that engage in similarly invasive physical procedures and surgery?

This is both commonsense and pro-woman.

The regulations are completely reasonable and include requirements like retaining adequate staffing, having soap dispensers, and other basic sanitary requirements.

Under House Bill 2, facilities are required to make their hallways wide enough so a first responder can maneuver a stretcher in case a woman requires emergency attention. And an abortionist’s admitting privileges at a local hospital certainly come in handy if something goes wrong during an abortion, when time and knowledge of the patient may be a matter of life and death.

As Alliance Defending Freedom explains in a friend-of-the-court brief filed at the Supreme Court on behalf of thousands of gynecologists, obstetricians, and other health care professionals, abortion, like many outpatient procedures, carries inherent serious risks—hemorrhaging, perforation of the uterus, and infection, just to name a few.

Yet those who oppose the Texas safety law argue that the standards required by House Bill 2 are unduly onerous—they say that if these regulations stand, they will have the effect of shutting down abortion facilities, claiming that “as a result of House Bill 2, 75 percent of Texas abortion facilities have closed.” They also contend that chemical abortions are not that dangerous or that abortions generally don’t carry the same hospitalization risks as other ambulatory out-patient procedures.

Those points are easily debunked.

For starters, the abortion facilities’ claim that the Texas law resulted in the closure of the majority of Texas abortion facilities is untrue. In a friend-of-the-court brief, the Texas Alliance for Life Trust Fund and University Faculty for Life, which comprises more than 400 faculty members from 80 U.S. colleges and universities, address the map of closed abortion facilities the litigants created and attached to their opening brief filed at the Supreme Court.

[T]he map in their appendix suggests that they started with the number of abortion clinics that existed on October 30, 2012 — one year before House Bill 2 took effect — and assumed that House Bill 2 has caused or will cause every non-ASC [ambulatory surgical centers] abortion provider to close. The plaintiffs’ claim is false because at least ten of the State’s abortion clinics closed for reasons having nothing to do with House Bill 2, and those clinics would have closed even if House Bill 2 had never been enacted.

It should be noted that the abortion facilities admitted to the court in their second brief (footnote 5, p.11-12) that there was “an error in transferring the data to the map.” However, it is unclear which data they are referring to.

Addressing the chemical abortion assertion, it turns out that a drug-induced abortion—a frequent service of abortion facilities—does carry a greater risk than a surgical abortion. This is so true that when Mifeprex—the primary drug used in chemical abortions—was first introduced, the U.S. Food and Drug Administration concluded that it “could only be used safely if distribution was limited to physicians who could assess the duration of a pregnancy, diagnose an ectopic pregnancy, and provide patients with access to surgical intervention if necessary.”

And speaking of surgery, as the pro-life gynecologists and obstetricians friend-of-the-court brief explains, “[t]he overall hospitalization rate following elective abortion (one in three hundred patients) is similar to rates for other invasive outpatient procedures such as liposuction, gastrointestinal endoscopy such as colonoscopy and upper endoscopy.”

This is why, if you have a procedure done at an outpatient, ambulatory center like liposuction or a colonoscopy, chances are very good that your doctor will have admitting privileges at a local hospital just in case something goes wrong.

In fact, Medicare providers are required to adhere to admitting privileges rules at their clinics. Outside the abortion debate, for example, federal law has long required “ambulatory surgery centers” participating in the Medicare program to enter into written transfer agreements with local hospitals or “[e]nsure that all physicians performing surgery in the [center] have admitting privileges” at a hospital. This mandate “ensure[s] that patients have immediate access to needed emergency or medical treatment in a hospital.”

In other words, it is obvious that the government believes there are necessary safety reasons for admitting privileges.

However, moving beyond the facts, it’s the sheer hypocrisy of those fighting the no-brainer Texas safety law that’s most frustrating. Since Roe, pro-abortion activists have demanded that abortion be treated as common health care service. And certainly, we’ve seen that in their attempts to use to the government to force everyone from family businesses and Christian colleges and universities to churches to health care professionals to participate against their deepest held convictions in their individual “health care” choices.

If abortion is to be treated as health care, then it doesn’t get a free pass on health and safety protocol that other health care clinics are required to follow. It’s as simple as that.

There’s a reason a state implements health and safety regulations on medical clinics that operate within its borders—not only does a state have the legal authority to do so, but it has a moral obligation to ensure the well-being of its people. Nobody wants a Kermit Gosnell operating on his watch.

Pro-abortion activists claim this case is just a back-door way to shut down abortion facilities. The reality is, they are fighting for back-alley-style abortions.

If abortion facilities are so subpar in health and safety standards that the entire industry might collapse if the Supreme Court affirms this Texas safety law, then there is a much greater problem to address.

Regardless of one’s position on abortion, we should all agree that abortion facilities should be required to implement commonsense protections that ensure maximum safety for the women walking through their doors. Now that’s caring about the whole woman’s health.