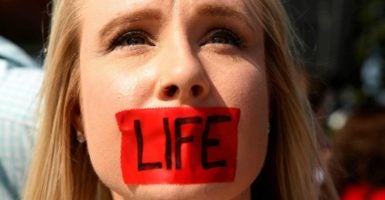 A new Texas law puts restrictions on how the bodies of aborted babies can be treated. (Photo: Kevin Lamarque/Reuters /Newscom)

A new set of rules in Texas requiring aborted babies to be cremated or buried has prompted a legal battle in the Lone Star State. Pro-abortion groups are attempting to halt the law with a lawsuit, and its implementation has now been delayed by a court order.

The abortion burial measure, which would also apply to miscarriages that happen at hospitals, abortion centers, and other health clinics, was set to go into effect Dec. 19.

The state department of health approved the measure, but it has been delayed until Jan. 6 by a court order.

Advocates for the new law say it is necessary to protect the dignity of life and also public health.

“All human beings deserve to be treated with respect after death,” Marc Rylander, a spokesperson for Texas Attorney General Ken Paxton, said in a statement before the court hearing delaying the measure on baby tissue remains. “To that end, Texas will continue to defend the safety and dignity of the unborn up to and as far as Supreme Court precedent will allow.”

These new rules simply provide for the humane disposal of fetal tissue instead of sending it to landfills like unwanted trash, as is the abortion industry’s current practice. They do not, in any way, interfere with a woman’s access to abortion. Our office looks forward to proudly defending these commonsense rules in court.

“The politically-motivated rules are designed to restrict a woman’s right to access safe and legal abortion by increasing both the cost of reproductive health care services and the shame and stigma surrounding abortion and pregnancy loss,” the organization said in a press release.

After the Center for Reproductive Rights sued John Hellerstedt, in his official capacity as commissioner of the Texas Department of State Health Services, U.S. District Judge Sam Sparks temporarily delayed the implementation of the new rule, ABC News reported. Sparks is expected to decide, after a preliminary hearing on Jan. 3, if the burial rules will go into effect.

“Texas has chosen to dignify the life of the unborn by requiring the humane disposition of fetal tissue,” Paxton, a Republican, said in a statement following the hearing last week. “I am confident in the constitutionality of these rules and look forward to the court upholding their validity by Jan. 6.”

“Medical facilities will be required to either cremate or bury the unborn babies they kill, not contingent on the period of gestation—as opposed to sending the baby’s remains to be incinerated or dumped into a landfill, as most facilities currently do,” The Daily Wire reported on Nov. 29.

“I believe it is imperative to establish higher standards that reflect our respect for the sanctity of life,” Abbott said in a fundraising email in July, reported The Texas Tribune.

“Gov. Abbott believes human and fetal remains should not be treated like medical waste, and the proposed rule changes affirms the value and dignity of all life,” Ciara Matthews, Abbott’s deputy communications director, said in an emailed statement to The Daily Signal. “For the unborn, the mothers, and the hospital and clinic staff, the governor believes it is imperative to establish higher standards that reflect our respect for the sanctity of life.”

“Further, it is Gov. Abbott’s hope that the Legislature will consider legislation next session to enshrine the new rules into state law,” Matthews added.

The Texas department of health said that the measure could also be effective in stopping the spread of disease.

“While the methods described in the new rules may have a cost, that cost is expected to be offset by costs currently being spent by facilities on disposition for transportation, storage, incineration, steam disinfection, and/or landfill disposal,” Carrie Williams, Texas health department spokesperson, told LifeNews.

Pro-abortion activists are unhappy that the rules could “create more obstacles for people obtaining abortions,” The Dallas Morning News reported.

Critics of the law say burial and cremation costs could get in the way of access to abortion.

Nancy Northup, president and CEO of the Center for Reproductive Rights, said in a statement that the law is an “insult to Texas women” and a “new low.”

“This restriction, just like the many before it, all across our nation, does not create any health benefit for women and is strictly designed to limit access to safe, quality abortion care,” Amy Hagstrom Miller, CEO of Whole Woman’s Health, said in a statement.

Whole Woman’s Health is part of the lawsuit filed by the Center for Reproductive Rights on behalf of multiple health clinics.

The Texas Catholic Conference of Bishops, in a press release last week, said the Catholic Church would pay for the burial costs at Catholic cemeteries.

“Catholic cemeteries estimate that their costs will range from $1,500 to $13,000 annually to inter children who die from abortions,” the press release said. “There are more than 50 Catholic cemeteries in the state; the [Texas Catholic Conference of Bishops] also hopes to collaborate with other cemeteries, funeral homes, and mortuaries.”

Abortions and miscarriages that take place at home are exempt from the rules.

“We hope that this law helps our nation to see the humanity of the child in the womb,” says @Students4LifeHQ.

Pro-life advocates point out the “humanity” that comes with burying a dead baby.

“It’s no surprise the abortion industry is adamantly opposed to this law. They would rather sell those body parts for money or find some other nonhumanitarian way to dispose of the remains,” Kristan Hawkins, president of Students for Life of America, told LifeSiteNews.

“We hope that this law helps our nation to see the humanity of the child in the womb and also helps women who are contemplating abortion to understand more fully the unique gift of a child.”

“What we’re saying is, it needs to be humane, and the mother needs to be given the opportunity to have a say and be informed with what’s happening,” Kristi Hamrick of Americans United for Life says, according to NPR.