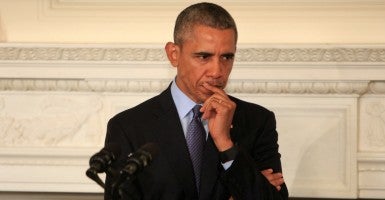 Conservatives have been critical of President Obama for what they consider executive overreach during his tenure. (Photo: Pool/Sipa USA/Newscom)

Rep. Ken Buck, R-Colo., is still angry about the omnibus spending bill that passed through Congress more than two months ago.

Buck is frustrated—not only by what Congress included in the massive $1.1 trillion omnibus spending bill, but also by what Congress intentionally left out. He wants the legislature to reassert its rule-making authority by passing several conservative policy riders designed to push back against executive overreach.

“We need to keep fighting for the provisions in this bill, however long it takes,” Buck told The Daily Signal. “Our responsibility to reassert the constitutional power of Congress does not end simply because it is a new legislative year or even with a new president.”

In recent months, initiatives, projects, and packages discussing Article I, the part of the Constitution that authorizes congressional power, have become increasingly popular among conservatives.

Buck complained in a January letter to colleagues that Congress missed an opportunity with the must-pass omnibus spending bill “to set funding priorities and direct the policies carried out with those funds.”

Buck says his bill attempts to re-establish legislative preeminence by pushing specific policies. It’s “a consolidated platform of many of the riders and defunds that were discussed but not enacted.”

Among more than a dozen other provisions, Buck’s bill would defund the EPA’s Waters of the U.S. rule, which extends federal authority over smaller waterways, and President Barack Obama’s executive action on immigration. It would also prevent the IRS from funding the Affordable Care Act and halts grants to sanctuary cities flouting immigration law.

Though the legislation has attracted 19 cosponsors, it has little legislative momentum. Unless it’s attached to must-pass legislation, like the omnibus spending bill, it’s unlikely Buck’s package of riders could make it to the president’s desk.

Buck’s office said the congressman is trying to keep the riders relevant and further the overall conversation.

“Article I is not a keyword, a trend, a brand, or a Facebook graphic,” Buck wrote colleagues. “It’s a principle that protects the Republic. But the Republic only benefits if members of Congress assert their constitutional mandate.”