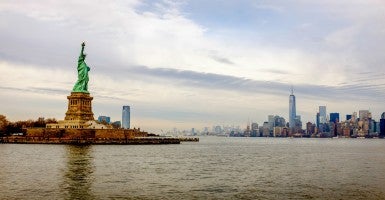 Diluting the votes of ordinary citizens of New York City is fundamentally unfair. It encourages contempt for both the law and our election process. (Photo: istockphoto)

The New York Post is reporting that some members of the Black and Latino Legislative Caucus will be pushing for the New York City Council to pass a law allowing illegal aliens to vote in NYC elections for mayor, comptroller, public advocate, borough president, and City Council. This is an anti-democratic policy driven by politics that dilutes what it means to be a citizen.

The U.S. Constitution reserves the right to set the qualifications for voters for both state and federal elections to the states themselves. However, the federal government has exclusive authority over immigration, and federal law makes it a felony for aliens—whether illegal or legal—to register or vote in federal elections. Every state has also banned aliens from voting in state elections, although a handful of jurisdictions like Takoma Park, Maryland, allow aliens to vote in local elections. Despite the federal prohibition, it looks as though the Obama administration’s Department of Justice is trying to prevent states from verifying the eligibility of voters by requiring proof of citizenship to register.

On the other hand, the Guarantee Clause, Article IV, Section 4 of the Constitution, does state that “[t]he United States shall guarantee to every State in this Union a Republican Form of Government[.]” Allowing someone outside the political community to vote would raise serious questions about whether state electoral procedures would be unrepublican and thus be unconstitutional.

The Supreme Court, however, has ruled in Luther v. Borden (1849) that this clause in the Constitution is a “political question” and thus is adjudicated not by the federal courts, but by the rough-and-tumble of politics.

As a practical matter, this policy would encourage bad governance by NYC politicians. Specifically, city policies that provide handouts from the tax-paying legal citizen base to the illegal alien voting bloc would become more attractive. This policy would also encourage politicians to turn a blind eye toward the flouting of our nation’s immigration laws. This sort of disrespect for the rule of law has serious consequences.

Most importantly, this policy would raise serious questions about the democratic legitimacy of the NYC government. Allowing illegal aliens to vote effectively disenfranchises legitimate voters by diluting their votes. While allowing illegal aliens to vote might play well to certain interest groups and to affluent liberal voters, the interests of ordinary New Yorkers who oppose this policy (who pay the taxes and do the work that runs the Big Apple) will be sacrificed.

Diluting the votes of ordinary citizens of New York City is fundamentally unfair. It encourages contempt for both the law and our election process.

Diluting the votes of ordinary citizens of New York City is fundamentally unfair. It encourages contempt for both the law and our election process.

The United States of America was founded on the belief that citizens can peacefully come together and decide upon a form of government that is best for them. Our legal system rests on the belief that we have all come together as a part of this social contract and, when courts or the legislature make decisions, that the decision is something we have already agreed to follow. We have bound ourselves to this government and abide by its democratically legitimate decisions.

But when our government outsources its decision-making to people who have never peacefully and legally entered our political community, that makes our entire system of government appear despotic and unrepresentative.

Illegal aliens have not entered the American social compact, nor made a commitment to the U.S. Constitution, U.S. laws, and the U.S. cultural and political heritage. They should not be allowed to participate in our elections and potentially change the outcome of closely contested races. While it might be good short-term politics for some activist lawmakers in NYC, such a policy will harm us all in the long run and should be rejected.