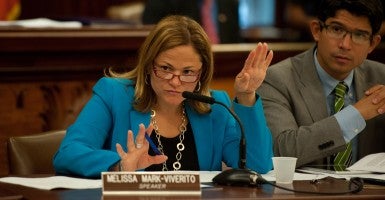 The federal government is about to get kicked off Rikers Island.

Taking a page from the Obama immigration playbook, the New York City Council this week is deciding which immigration laws it wants to enforce and which ones it does not.

Under the proposed legislation that will very likely pass the Democrat-controlled council, the New York Police Department and the Department of Corrections will no longer honor detainee requests from Immigration and Customs Enforcement (ICE) unless ICE has a warrant from a federal judge.

Additionally, even if ICE has such a warrant, the legislation states the NYPD and Department of Corrections may only honor it if the suspect has been convicted of a serious or violent crime (as defined by the city council) in the past five years or may be a suspect on a terrorist watch list.

In other words, if you’re living in the United States illegally and get caught committing a crime, the safest place for you to end up may be a local jail in one of the five boroughs.

The press release from co-sponsors of the legislation stated they were introducing “groundbreaking legislation to protect New Yorkers.”  Really?  Which New Yorkers–the citizens and legal residents of New York or those who are illegally living there?

A review of statements from supporters of the legislation are revealing. “By further limiting ICE’s role in the detention and deportation of immigrant New Yorkers, we set the national standard for the treatment of our immigrant population,” said Council speaker and legislation sponsor Melissa Mark-Viverito.

“It is my hope that this will serve as a model for other municipalities throughout the country that are also struggling to keep ICE from targeting its most vulnerable residents,” said Council member and co-sponsor Rafael Espinal. Rep. Jose Serrano, D-N.Y., said,“I applaud the efforts…to protect NYC’s immigrants and help promote an environment where they can live without constant fear of deportation.”

But the law does matter and it’s very possible this legislation itself is illegal. According to Heritage legal expert Hans von Spakovsky:

And that is exactly what policies creating sanctuary cities do–they encourage more people to come here illegally because they believe once they get here no one is going to send them home.

If that sounds familiar, it’s because it’s the same tactic President Obama has used via executive actions deferring deportations. (He’s promised more of after the mid-term elections.)  While such moves may be popular in ultra-liberal Manhattan, they aren’t so popular in many other places around the country–which is exactly why Obama is waiting to act.