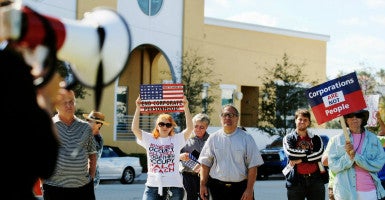 If President Barack Obama or a future Democratic successor were to replace late Supreme Court Justice Antonin Scalia with a liberal, a host of prior high court decisions that favored conservatives could be revisited, and possibly be overruled completely.

The reach of cases that could get another look by a liberal majority Supreme Court touch on bedrock issues of American life, such as race, religion, voting rights, campaign finance, and the Second Amendment.

While it is normal practice for the Supreme Court to rule again on law it already settled, legal experts say the outcome of such an effort if a liberal justice replaced Scalia would be especially dramatic. Indeed, a move from Scalia, a staunch conservative, to a liberal would be the largest ideological shift in the court since 1991, when Thurgood Marshall retired and was replaced by Justice Clarence Thomas.

“The Supreme Court can decide we got a past decision wrong, they absolutely can,” said John Malcolm, the director of The Heritage Foundation’s Meese Center for Legal and Judicial Studies. “And they have done that. Every term they will typically overturn one or two of their prior precedents.”

“If a liberal were to replace Justice Scalia, any case that was a 5-4 decision in which Scalia was in the majority is potentially vulnerable, and there are a lot of very important cases that are in that category,” Malcolm continued. “The stakes in choosing the next justice are extremely high.”

Law experts caution that any change would come slowly, as the justices fear being viewed as overly political. But change will definitely happen.

“I would think—assuming a five-member Democratic majority—they are not going to just start reversing cases left and right,” said Eric J. Segall, a law professor at Georgia State.

“The Supreme Court never does that, and they are sensitive to being called politicians,” Segall told The Daily Signal. “But I think there would be some major cases they would distinguish in a way that would have the practical impact of overruling them.”

If the majority were to flip parties, Malcolm; Segall; and Russell Wheeler, a Brookings Institution legal scholar, agree that some significant prior Supreme Court decisions could be in jeopardy.

Cases ripe for change, all of which have been decided since Chief Justice John G. Roberts Jr. took leadership of the court in 2005, include:

On the other hand, recent major decisions favoring the Democratic-appointed judges, such as their victories on same-sex marriage and the Affordable Care Act, would almost certainly be left untouched if a liberal were to replace Scalia.

For the Supreme Court to revisit a ruling, there’d have to be another lawsuit that challenges issues relevant to that prior decision.

When writing opinions, Supreme Court justices often encourage a future revisiting of a decision so that it could be reversed if the case came before the court again. Martin Luther King III speaks out in support of the Voting Rights Act. The Supreme Court struck down a key section of the act in 2013. (Photo: Rod Lamkey Jr./ZUMA Press/Newscom)

For example, in the case last year allowing lethal injections in executions, a dissenting member, Democratic appointee Stephen G. Breyer, hinted that he was prepared to determine the death penalty unconstitutional.

“Rather than try to patch up the death penalty’s legal wounds one at a time,” Breyer wrote in dissent, “I would ask for full briefing on a more basic question: whether the death penalty violates the Constitution.”

Though it’s unlikely a new liberal-majority Supreme Court would take such a sweeping action so quickly, a potential plaintiff would likely take those words as a cue to bring a challenge on the issue again.

“I doubt very much that you’d get one new justice, and all of sudden the Supreme Court would say as a matter of principle that the death penalty is contrary to the Eighth Amendment [prohibiting cruel and unusual punishment],” Wheeler said. “But you may get decisions willing to curtail the death penalty in various ways.”

In addition to worrying about overstepping their authority, Supreme Court justices also may be reluctant to violate the legal principle of stare decisis, which cautions against overruling settled law.

But in some cases, the ire toward a specific case may be so strong that justices are willing to overlook that doctrine.

“I don’t think Democratic justices or Republican justices are any different along this score [willing to overrule settled law],” Segall said. “In general, I don’t see the court expressly overruling things. Citizens United, I think, would be limited dramatically, but I’m not sure it’d be overturned—that’d be like overturning Roe v. Wade. But they would expressly overrule the voting rights case [Shelby County v. Holder]. I think liberal judges and liberals in general hate the result of that case the most.”