What Will Obama Achieve With His Cuba Visit? 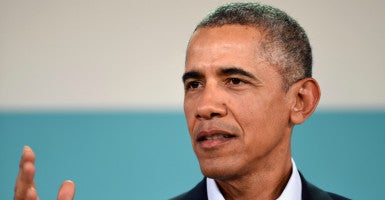 “There is good reason why no U.S. president since Calvin Coolidge has visited the island," Ana Quintana, a policy analyst at The Heritage Foundation, said. (Photo: Yin Bogu Xinhua News Agency/Newscom)

Next month, I'll travel to Cuba to advance our progress and efforts that can improve the lives of the Cuban people.

“President Obama’s decision to visit Cuba reveals the real goal of his Cuba policy: legitimization of the Castro regime,” Ana Quintana, a policy analyst in Latin America and the Western Hemisphere at The Heritage Foundation’s Davis Institute for National Security and Foreign Policy, said in a statement.

The last sitting U.S. president to visit Cuba was Calvin Coolidge in 1928.

“There is good reason why no U.S. president since Calvin Coolidge has visited the island. For over half a century, Cubans have remained under the boot of the Western Hemisphere’s longest-running military dictatorship,” Quintana said, adding that Cuba had been “promoting anti-Americanism.”

“President Coolidge traveled to Cuba on a U.S. battleship, so this will be a very different kind of visit,” Ben Rhodes, Obama’s deputy national security adviser, noted in a Medium post Thursday morning.

A little over a year ago, Obama pledged with Cuba’s President Raúl Castro to reopen diplomatic channels.

14 months ago, I announced that we would begin normalizing relations with Cuba – and we've already made significant progress.

Last summer, we restored diplomatic relations and Secretary of State John Kerry traveled to Cuba to raise the American flag over our Embassy. This enhanced diplomatic presence makes it much easier for the United States to advance our interests and values in Cuba, as we do in countries around the world. … Changes in U.S. policies and regulations have allowed for greater travel and commerce between our countries.

“It’s so abhorrent any way that you look at it,” Quintana told The Daily Signal. “U.S. presidents are not supposed to be in support of military dictatorships, especially if it’s not in our national interest.”

Our flag flies over our Embassy in Havana once again. More Americans are traveling to Cuba than at any time in the last 50 years.

“Today’s announcement marks a huge step toward successfully rejecting failed policies that are rooted in the Cold War and creating opportunities that will engage and empower the Cuban people,” the White House announced.

“There is much more that can be done,” Rhodes wrote, adding, “Ultimately, we believe that Congress should lift an embargo that is not to advancing the Cuban people’s individual well-being and human rights, and remove onerous restrictions that aim to dictate to Americans where they can and cannot travel.”

This week, Cuban Foreign Trade Minister Rodrigo Malmierca addressed the U.S. Chamber of Commerce—making him the first senior Cuban official to do so in more than a half-century.

“Under this regime, Cuba’s primary export has been anti-Americanism,” Quintana said. “The administration’s unilateral concessions to Havana have strengthened the regime and eased what had been building pressure to transition to democracy. Since the concessions were announced, the regime has stepped up its repression of democratic activists and sparked a huge increase in the number of Cuban refugees entering the U.S.”

I’m first-generation Cuban-American. My family was born in Cuba. My parents are political refugees. For me, this is the kind of thing that I never thought in my lifetime that I would ever see a sitting U.S. president visiting the same dictatorship that they escaped from.

People come to America for a reason. This is a great country of opportunity because we’ve always had presidents in the United States that have always stood up to the Cuban government. … To now have this president whose belief system is completely at odds with the idea of freedom and principles of freedom is mind-blowing.