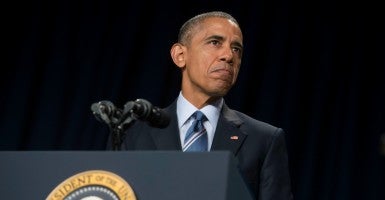 It would be a tax that disproportionately hurts low-income families. (Photo: Shawn Thew/dpa/picture-alliance/Newscom)

“Gas prices are too cheap!”—said no one ever.

Wait, scratch that: The president himself actually believes that gas prices should be higher.

Though those were not his exact words, President Barack Obama is now calling for a $10-per-barrel tax on oil, to pay for mass transit, high-speed rail, self-driving cars, and other infrastructure projects he believes will reduce America’s carbon footprint.

To be clear, this is nothing more than a tax on gasoline, diesel, and other fuel, paid for by Americans, at a time when they’re enjoying low prices at the pump.

The U.S. Energy Information Administration estimates that a barrel of crude oil produces 45 gallons of petroleum products. Nineteen gallons go toward gasoline, 12 gallons toward diesel fuel, 4 gallons for jet fuel, and 7 gallons for other petroleum liquids for the petrochemical industry to make items like plastics. The rest go toward things like liquefied petroleum gases and home heating oil.

Assuming the tax is spread proportionally among all the products a barrel of crude produces, that equates to roughly 22 cents per gallon. To put that into context, the federal gas tax is 18.4 cents, and the federal diesel tax is 24.4 cents.

The national average for regular gasoline is $1.76. Lower gas prices have provided a huge windfall and are putting money back into the wallets of American households. The U.S. Energy Information Administration projects that cheaper gasoline saved families approximately $700 in 2015. The huge boost in disposable income gives them the opportunity to spend money going out to eat, on electronics, or at department stores.

While some economists have warned of the dangers of low oil prices to financial markets, a new analysis from Merrill Lynch estimates that consistently low oil prices “will push back $3 trillion a year from oil producers to global consumers, setting the stage for one of the largest transfers of wealth in human history.”

It would be a tax that disproportionately hurts low-income families.

Obama would like to change all that by more than doubling the federal gas tax. And it would be a tax that disproportionately hurts low-income families the most, because transportation and residential energy costs represent a larger portion of their budget. The median family spends about 5 cents out of every dollar on energy costs; low-income families spend about 20 cents of every dollar.

Jeff Zients, director of the National Economic Council, argued, “This is not a gas tax. This is a per-barrel fee on oil paid by the oil companies.” And those magic beans Zients sold you really will grow a giant beanstalk. Plain and simple, these costs will be passed down to you in the form of higher energy prices.

Clearly the president’s plan is dead on arrival, but it does provide an important look into the Progressive thinking. When free enterprise increases energy supplies, lowers prices for families, provides new job opportunities, and makes Progressives’ politically preferred sources of green energy even more uncompetitive (even with the taxpayer-funded handouts), something must be done to curtail that growth.

This time it’s a newly proposed tax. Throughout Obama’s presidency, it’s been regulation. None of it is good news for American households.