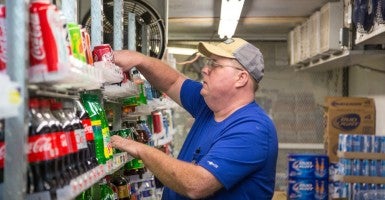 Lyndon McLellan had $107,000 seized by the IRS in 2014. Yesterday, a judge ruled the government has to cover the costs of his legal fees and expenses. (Photo: Institute for Justice)

A federal court delivered a victory to a North Carolina convenience store owner from whom the IRS had seized $107,700, directing the government to reimburse him for  more than $20,000 in legal fees and expenses.

Lyndon McLellan, who owns a convenience store in Fairmont, N.C., already had won back the $107,700 the Internal Revenue Service took from him in 2014.

A federal judge ruled Tuesday that the federal government is required to pay McLellan’s legal fees, his expenses, and interest earned on the money the IRS seized in a case that could set a “powerful precedent” for victims of forfeiture fighting to be made whole.

“When the government takes people’s property without justification and then tries to walk away—what this decision really stands for is the idea that the government doesn’t get to put the cost of its mistake on the person who has done nothing wrong,” Robert Johnson, a lawyer with the Institute for Justice, who represented McLellan, told The Daily Signal. Johnson added:

When the government takes someone’s life and turns it upside down by taking their money through civil forfeiture and then realizes it’s made a mistake, the government has to be the one to bear the costs.

The Daily Signal first reported in May that the IRS had seized the $107,000 from McLellan’s bank account. Days later, the government moved to dismiss the case and cited changes to the Justice Department’s policy regarding civil asset forfeiture made in March as its reason for dropping the action.

In his ruling, U.S. District Judge James Fox said McLellan was fully within his right to demand that the government pay for his legal fees and expenses, as is guaranteed under the Civil Asset Forfeiture Reform Act of 2000. Fox wrote:

[T]he damage inflicted upon an innocent person or business is immense when, although it has done nothing wrong, its money and property are seized. Congress, acknowledging the harsh realities of civil forfeiture practice, sought to lessen the blow to innocent citizens who have had their property stripped by the government. …

This court will not discard lightly the right of a citizen to seek the relief Congress has afforded.

McLellan and Johnson have fought for full compensation for McLellan for more than eight months. Although Johnson contended that the “wheels of justice turn slowly,” he called the decision a “vindication.”

“For Lyndon, I spoke with him, and he’s absolutely thrilled about this decision,” Johnson said. “This is vindication that has been a long time coming. Lyndon did nothing wrong, and it’s gratifying to see a federal judge stick up for that fact and to make things right.”

McLellan has owned and operated L&M Convenience Mart since 2001. According to court documents, the IRS seized his money because agents believed he had committed “structuring” violations. McLellan, however, was never charged with a crime.

Structuring involves making consistent cash deposits or withdrawals of just under $10,000 into or out of a bank account to avoid federal reporting requirements. Law enforcement targeted structuring as a way to stop money laundering and drug trafficking.

However, several instances have arisen involving innocent Americans, such as McLellan, who were unaware they were violating the law in the first place.

The government can seize money—as it did in McLellan’s case—from those accused of committing structuring violations under a subset of civil asset forfeiture laws that govern cash transactions.

Though McLellan went on to receive the full $107,702.66 the IRS seized, the government moved to dismiss the case without covering his legal fees and expenses, as well as interest earned on the money.

Under the Civil Asset Forfeiture Reform Act, passed by Congress in 2000, McLellan and others who successfully challenge a forfeiture are entitled to those fees and expenses, which totaled more than $20,000 in McLellan’s case. Johnson, McLellan’s lawyer, said:

The court said very strongly if you’ve taken money from an innocent person and put them through what the court calls the harsh realities of the civil forfeiture practice, then you should have to make them whole. The government has a very aggressive interpretation of the structuring laws and believes that it was in its right to take Lyndon’s money.

Johnson said the federal court’s decision could have a significant impact on future cases involving forfeiture victims who are fighting to have their lawyers’ fees and expenses covered by the government.

He specifically cited the case of Iowa restaurant owner Carole Hinders, who, with the Institute for Justice, is heading before the U.S. Court of Appeals for the 8th Circuit to argue that the government should pay more than $67,000 in legal fees and expenses she accrued by challenging the forfeiture.

The IRS seized nearly $33,000 from Hinders’ cash-only restaurant in August 2013, saying she committed structuring violations. She received her money back in December 2014.

“This decision gives us a very strong tailwind heading into that argument, and it’s something that we’re going to be citing to the court,” Johnson said. “Lyndon now is going to be made whole, and Carole deserves to have the same result.”