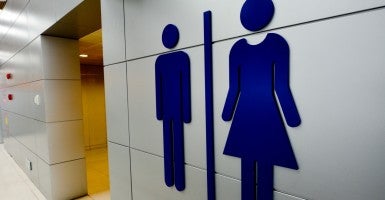 South Dakota could soon become the first state in the nation to pass legislation that would ban students from using public school bathrooms, locker rooms and showers that are opposite from their biological sex.

“I’m concerned about what I see happening in schools across our country,” said Rep. Fred Deutsch, a Republican from Florence who introduced a bill last week that would ban transgender students from using school facilities opposite from their biological sex.

Federal bureaucrats, without the force of federal law, are threatening to withhold federal funding from schools that do not allow transgender students full, unrestricted access to facilities of the opposite biological sex. I don’t want that to happen in South Dakota. And I especially don’t want our children to be required by the federal government to shower, change or use restrooms with other young people of the opposite biological sex.

Left-leaning groups like the Human Rights Campaign said the bill is “nothing more than a vile attack on students who are already vulnerable to high rates of discrimination and harassment.”

“The South Dakota House of Representatives’ vote in favor of discrimination against transgender students is alarming and appalling,” said JoDee Winterhof, HRC senior vice president for Policy and Political Affairs at the Human Rights Council, in a press release. “Fair-minded South Dakotans absolutely must stand up now and demand their lawmakers in the Senate stop this hateful legislation from moving any further.”

The legislation requires that a “reasonable accommodation” be made for students asserting their gender is different from their biological sex, and described a reasonable accommodation as “one that does not impose an undue hardship on a school district,” “a single-occupancy restroom,” “a unisex restroom,” or the “controlled use of a restroom, locker room or shower room that is designated for use by faculty.”

Deutch views his legislation as a necessary response to what he considers “aggressive” actions on behalf of the Obama administration to ensure schools comply with guidance they issued in April 2014.

Title IX is the federal law that prohibits discrimination on the basis of sex in any education program that receives federal funding. Prior to the 2014 issued guidance, it was unclear whether or not the law applied to students using sex-segregated facilities.

If schools do not comply with Title IX laws, they could be at risk of losing their federal funding.

Last year, a school in Palatine, Ill., experienced that first-hand, when the Department of Education threatened to strip them of millions of dollars in federal funding for refusing to grant a transgender student who was born male but identifies as female full, unrestrained access to the girls locker rooms.

>>> Read More: Why These High School Girls Don’t Want a Transgender Student In Their Locker Room

In its investigation, the Department of Education’s Office of Civil Rights ruled that Township High School District 211 had discriminated against the student “on the basis of sex.”

However, that ruling conflicts with two decisions handed down in Pennsylvania and Virginia, where courts ruled that Title IX does not apply to the issue of transgender students using sex-segregated facilities.

A similar case in Fairfax, Va., could elevate the legal debate. There, a teen who was born female but identifies as male is taking the case to the U.S. Court of Appeals for the 4th Circuit, where its decision could have a national impact.