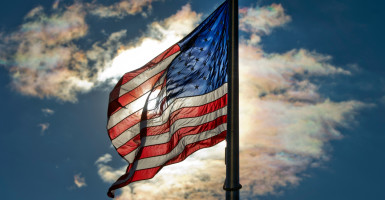 America’s economy remains less free than in past years even as the world’s other economies have grown more free overall, according to the 2016 Index of Economic Freedom released Monday by The Heritage Foundation and The Wall Street Journal.

“For a country founded on the idea of limited government, we are really falling down in that area,”  Terry Miller, director of The Heritage Foundation’s Center for Trade and Economics, said at a Heritage event later in the day.

The Index of Economic Freedom evaluates how free the economy of each ranked nation is by scoring variables in four categories—rule of law, government size, regulatory efficiency, and market openness.

Each policy area receives a score of 0 to 100, and the results are averaged to create an overall score for economic freedom.

The United States ranked 11th with a score of 75.4, down 0.8 points from last year—making the nation’s economy “mostly free” rather than “free.”

Overall economic freedom in the world increased, with the average score of 60.7 being the highest recorded in the publication’s 22-year history, editors said. Of the 178 countries evaluated, 97 saw their scores increase over the previous year.

America, however, is “a significant mover in the opposite direction,” Miller, who also directs Heritage’s Center for Data Analysis, said.

“This report confirms that America does not rank in the top 10,”  Rep. Kevin Brady, R-Texas, said at the event.  “I think that’s embarrassing.”

He pointed to programs such as the Troubled Asset Relief Program, federal bank bailouts, $1 trillion in stimulus spending, Obamacare, and the Dodd-Frank financial reform legislation as examples of regulation and spending that inhibit economic freedom.

Brady said he intends to reverse the damage by fixing the tax code.

“A 39-percent tax rate is a huge threat to economic freedom,” the Texas Republican said. “Fixing that costly, complex tax code is our number-one priority.”

A wise and frugal government, which shall restrain men from injuring one another, shall leave them otherwise free to regulate their own pursuits of industry and improvement, and shall not take from the mouth of labor the bread it has earned.

Increasing economic freedom, DeMint added, benefits millions by lifting them out of poverty and giving them brighter futures.