Why Senators Should Want to Preserve the Filibuster 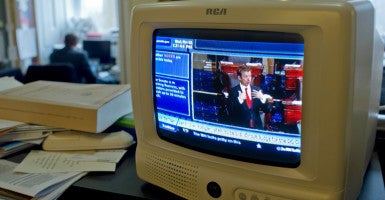 Sen. Rand Paul, R-Ky., is seen on the television in the Senate Press Gallery as he filibusters. (Photo: Chris Maddaloni/CQ Roll Call/Newscom)

It’s been reported that some Republican senators are looking to eliminate the filibuster on the Motion to Proceed to appropriations bills, citing frustration at the Democrats obstructing their agenda.

There are a lot of reasons why conservatives should preserve the filibuster (the practice of allowing a senator to speak, often against a certain bill, as long as he wishes). As Sen. Ben Sasse, R-Neb., recently wrote, it promotes cool debate and cautious review, it guards against tyranny of the majority, it limits the scope of government, and it ensures that every voice is heard. In short, it fulfills the Founders’ vision for the Senate.

But there are also a few reasons why keeping the filibuster is in the best interest of every senator:

1) Eliminating the filibuster this way won’t actually bring order to the Senate.

Speeding up the Motion to Proceed is only one side of passing appropriations bills; the minority can still block the Senate on final cloture.

(For healthy people who don’t live and breathe Senate procedural terms, the Motion to Proceed is just an agreement to consider and debate a certain bill. Cloture is the name for ending debate and having a vote. So your senator has two opportunities to stall harmful legislation: once while debating the Motion to Proceed, and again on the cloture before the final vote)

For example, just this last November, Democrats allowed the Senate to proceed to the Transportation, Housing, and Urban Development appropriations bill. Then they forced the bill to be withdrawn rather than vote on a germane amendment on Syrian refugees offered by Sen. Rand Paul, R-Ky.

Getting rid of the Motion to Proceed filibuster isn’t nearly as important to streamlining the legislative process as cleaning up the ridiculous and cluttered floor schedule. Instead of doing that, however, Senate leaders chose to focus on reauthorizing the Ex-Im Bank, passing a highway bill, and approving the Iran nuclear deal.

2) Eliminating the filibuster will create a class of “super senators”—and second-class senators.

Expediting the process for appropriations bills, but not for other legislation, will give senators on the Appropriations Committee and in leadership more rights than their colleagues; they’ll need only a bare minimum of votes to push their priorities.

Compounding the problem, making “super senators” by eliminating the filibuster means that their colleagues will have less leverage to negotiate for their policy priorities—if you’re not on Appropriations, and you’re not in leadership, good luck coming to the bargaining table.

This is bad not just for the disenfranchised members personally. It also matters to their constituents, who will ask why their senators agreed to give them a weaker voice compared to their fellow Americans.

3) Nobody is in the majority forever.

When you’re on top, it’s hard to imagine that someday you won’t be. But that’s Congress.

Preserving the filibuster—and setting an example for Democrats in full view of the American people—the current GOP majority can reaffirm their dedication to traditions that protect democracy, while writing themselves an insurance policy for the future. As Thomas More says in the 1966 classic movie “A Man for All Seasons,” “I’d give the Devil benefit of law, for my own safety’s sake.”

It has been promised that any rules change will go through regular order, so 67 votes will be needed to get rid of the filibuster. That means Democrats will have to be on board.

The only reason Democrats would help change the rules to curtail their own authority is because they know they’ll just block cloture on the back end, or they’re banking on trading cloture votes for favors once appropriation bills make it to the floor.

This is already a problem, with the mighty “cardinals” of the Appropriations subcommittees deciding which amendments live and die and their peers coming to them on bended knee. But skipping straight to this ugly horse trading by removing the filibuster is just a shortcut to more midnight amendments and backroom deals cut by leadership to pass their bloated bills.

That’s not how the Senate should work, and every senator should be interested in preserving the filibuster to keep the chamber from becoming a royal court.