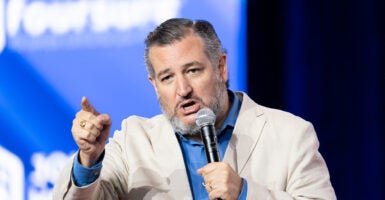 Sen. Ted Cruz on Wednesday called out a Senate Democrat for blocking passage of a pair of bills intended to provide schools with additional funding for safety and mental health services.

The Texas Republican, in a statement, questioned how Sen. Chris Murphy, D-Conn., could oppose the Securing Our Schools Act and the Protect Our Children’s Schools Act.

The Protect Our Children Act would have allowed schools to “use unspent, previously appropriated federal COVID-19 education-related funding to improve school security,” according to the press release.

“This bill would be the most serious, the most significant, the most major investment in school security Congress has ever enacted,” Cruz explained on the Senate floor.

Murphy objected to Cruz’s Secure Our Schools Act, but didn’t explain why. Cruz called him out for putting partisanship before solutions, saying:

What we just saw reveals that the Democrats have one objective when a mass murder happens, and that is to take away the Second Amendment rights of law-abiding citizens. That is always, always, always their solution.

Never mind that it doesn’t work. … If another lunatic attacks a school, and there’s not a police officer at the front door to stop it, remember right now. Remember this moment, when the Democrats said, ‘No, we will not protect our kids.’

Cruz has made previous efforts to keep schools safe while protecting Second Amendment rights. In 2013, an amendment Cruz co-sponsored with Sen. Chuck Grassley, R-Iowa (retooled in 2021 as the Protecting Communities and Preserving the Second Amendment Act) would have further bolstered the background-check system to keep guns away from criminals and added many protections of the gun rights for ordinary citizens, but Democrats blocked it.

Cruz and Barrasso made another effort in June with the Safe Kids, Safe Schools, Safe Communities Act, but that was blocked by Senate Democrats then, too.

Cruz tweeted that the blocking of the Securing Our Schools Act was “utterly shameful” and that the bill would have “doubled the number of police officers in schools to protect our kids.”

Murphy’s office did not respond to The Daily Signal’s request for comment.