The Supreme Court Will Hear Case on Administration’s Immigration Actions 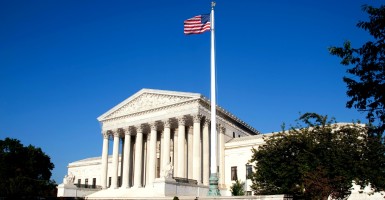 Let’s hope the Supreme Court will help restore the balance of power by setting the administration straight in this case. (Photo: iStockphoto)

The Supreme Court will hear a case brought by Texas and 25 other states challenging President Barack Obama’s attempt to give legal status and work authorizations to more than four million illegal immigrants.

In a brief order today, the Supreme Court directed the government and the states to address whether the Obama administration’s program “violates the Take Care Clause of the Constitution.” [The case was set to be heard April 18.]

The Programs in Question

In 2012, the administration created the Deferred Action of Childhood Arrivals program, enabling 1.7 million illegal aliens under 30 years old brought to the U.S. as children to apply for work authorization and deferred deportation. A deferred action is relief from deportation or removal proceedings that can be granted by the Department of Homeland Security.

Then, in 2014, this program was expanded by, among other things, eliminating the age cap and increasing the term of deferred action and employment authorization from two to three years.

In addition to lawful presence, Deferred Action for Parents of Americans grants deferred action recipients benefits such as work authorizations, driver’s licenses, Social Security, and other government benefits, costing an estimated $324 million over the next three years, according to the district court.

Last November, a federal appeals court ruled in favor of the states, finding that they were likely to succeed on the merits of their claims that the Deferred Action for Parents of Americans program violated the Administrative Procedure Act (APA).

The states argued that this program violates the APA’s notice-and-comment requirement as well as the Take Care Clause of the Constitution. Since they bear the brunt of the financial burden of this program, the lower court ruled that they had standing to sue.

The federal appeals court did not rule on whether the Obama administration violated the Constitution in promulgating the Deferred Action for Parents of Americans program (which is what the Supreme Court today instructed the parties to address). The Court will also consider whether the administration complied with the APA.

Article II of the Constitution charges the president with the duty to carry out the law—to “take care that the laws be faithfully executed.” Contrary to what some more ambitious presidents would have us believe, this was meant to constrain the executive’s power. It’s a duty that includes complying with statutory mandates, enforcing laws and regulations (including prosecuting lawbreakers), and defending the validity of laws in court.

The Obama administration has argued that its Deferred Action for Parents of Americans program is merely an exercise of prosecutorial discretion—the policy that the executive enjoys wide discretion in how to execute the law so it may prioritize the use of law enforcement resources and decide not to enforce a particular law against a particular individual or small category of individuals on a case-by-case basis.

But the Obama administration’s decision not to deport (and further to grant status and benefits to) an estimated 4 million illegal aliens and to call this “prosecutorial discretion” stretches that limited policy too far.

Courts tend to be reluctant to say the president has abused his discretion or crossed the line into abdicating a constitutional duty.

Obama, however, has clearly abdicated his duty to take care that the laws be faithfully executed, and he’s harmed the separation of powers that the Founders of the Constitution so carefully delineated.

From the myriad delays of the Affordable Care Act to refusing to enforce federal drugs laws to now effectively amending our immigration laws, Obama has positioned himself as a super-legislator with the power to override the law.

Let’s hope the Supreme Court will help restore the balance of power by setting the administration straight in this case.