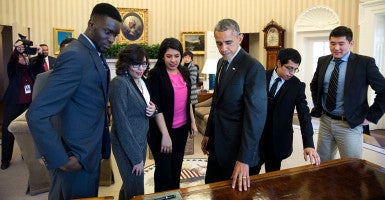 President Barack Obama shows the Resolute Desk to a group of DREAMers following their Oval Office meeting in which they talked about the Deferred Action for Childhood Arrivals program, Feb. 4, 2015. (Photo: Pete Souza/White House)

On Monday night, a three-judge panel on the U.S. Court of Appeals for the Fifth Circuit struck a blow to President Barack Obama’s attempt to confer lawful presence and work authorizations on more than four million illegal immigrants.

In a 2-1 decision, the panel ruled that a preliminary injunction that blocks Obama’s “Deferred Action for Parents of Americans and Lawful Permanent Residents” (DAPA) from going into effect must stand.

After Congress refused to pass the DREAM Act at least two dozen times between 2006 and 2011, Obama decided to bypass Congress altogether and “change” the law by executive fiat.

In 2012, the administration created the Deferred Action of Childhood Arrivals (DACA), enabling 1.7 million illegal aliens under 30 years old brought to the U.S. as children to apply for work authorization and deferred deportation. Then, in 2014, DACA was expanded by, among other things, eliminating the age cap and increasing the term of deferred action and employment authorization from two to three years.

The administration also created DAPA, conferring deferred action on illegal aliens whose children are U.S. citizens or lawful permanent residents, provided no other factors make deferred action inappropriate. In addition to lawful presence, DAPA grants deferred-action recipients benefits such as work authorizations, driver’s licenses, Social Security, and other government benefits, costing an estimated $324 million over the next three years, according to the district court.

Texas and 25 other states challenged DAPA, alleging that it violates the Constitution’s Take Care Clause and the Administrative Procedure Act (APA). A federal district court held that DAPA violated the APA’s notice-and-comment requirements and preliminarily stopped the Department of Homeland Security from implementing “any and all aspects or phases” of DAPA. Earlier this year, the Fifth Circuit denied the United States’ request for an emergency stay.

On Monday, the appeals court upheld the district court’s preliminary injunction, finding that Texas has standing to sue, and the states established a substantial likelihood of success on their claims that DAPA violated the APA. The court did not rule on the constitutional issue.

The court found that Texas has standing to sue—meaning it has an injury that is “fairly traceable” to DAPA—because DAPA would enable at least 500,000 illegal aliens to receive subsidized Texas driver’s licenses, at a cost of $130.89 per license, which would end up costing the state millions of dollars. While the administration asserted that DAPA beneficiaries would then generate income for Texas by registering their cars and buying car insurance, the panel refused to accept this because “[w]eighing those costs and benefits is precisely the type of ‘accounting exercise,’ in which we cannot engage.”

The administration also argued that Texas could change its laws to avoid paying for the licenses. The panel noted:

[T]reating the availability of changing state law as a bar to standing would deprive states of judicial recourse for many bona fide harms[.] … [S]tates could offset almost any financial loss by raising taxes or fees. The existence of that alternative does not mean they lack standing.

Scrutinizing the Obama Administration’s Other Claims

Declining to prosecute offenders “does not transform presence deemed unlawful by Congress into lawful presence and confer eligibility for otherwise unavailable benefits based on that change.” Thus, the administration could not evade review by claiming that this deferred action was an exercise of prosecutorial discretion. The panel concluded that it is “much more than nonenforcement: It would affirmatively confer ‘lawful presence’ and associated benefits on a class of unlawfully present aliens. Though revocable, that change in designation would trigger (as we have already explained) eligibility for federal benefits.”

The administration further claimed that DAPA is exempt from the APA (which requires new or changed substantive rules promulgated by administrative agencies to go through a public notice-and-comment period) because it is a “policy statement” rather than a substantive rule. The notice-and-comment process helps ensure that parties that will be affected for a new agency rule “have an opportunity to participate in and influence agency decision making.”

The panel disagreed that DAPA is exempt from the APA:

At its core, this case is about the Secretary’s decision to change the immigration classification of millions of illegal aliens on a class-wide basis. The states properly maintain that DAPA’s grant of lawful presence and accompanying eligibility for benefits is a substantive rule that must go through notice and comment, but it imposes substantial costs on them, and that DAPA is substantively contrary to law.

But this is likely not the last word on this case. The administration has announced it will ask the Supreme Court to review the Fifth Circuit’s decision. If the justices decide to take up the case, they could hear oral argument in early spring and issue a decision by the end of June.