After State of the Union, Freedom Caucus Gears Up: ‘We Are the Party of Yes’ 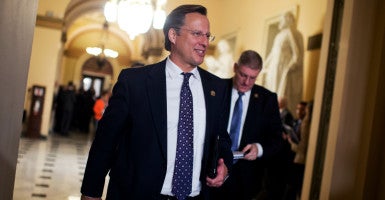 One member of the House Freedom Caucus called President Barack Obama’s America a “reverse world.” Other members used dark, dramatic descriptors like “dangerous,” “feckless,” “anxiety,” and “the worst” to define the Obama era.

And they said the president was “delusional” to use his final State of the Union address to tell the story of a nation on the rise as a result of his policies.

But the conservative group that pushed out former Speaker John Boehner also was focused on pushing out their own ideas, not merely criticizing Obama’s.

“I do think we should continue to promote the better ideas,” said Rep. John Fleming, R-La. “We are not optimistic they will be put in place while Obama is president, but we still need to be doing them to provide a contrast to the American people so they see the right way to go.”

“To be honest,” he added, “I am optimistic about a post-Obama world. The day he leaves office, the sun will rise, and the clouds will part, and we will see the sunlight once again, and this will be a different world.”

Poetics aside, Freedom Caucus members, in interviews with The Daily Signal, insist they do say yes to things, and they took Obama’s plea to “fix our politics” as more a reflection of his own approach to Congress than anything they’ve done wrong.

“The thesis of his talk was the idea of new politics, that we should all be full of kindness and unconditional love after he provides body blows and jabs to Republicans all night, and calls us angry, and implies we are uncompassionate,” said Rep. Dave Brat, R-Va.

“The thing is, we are a ‘yes’ party. We are ‘yes’ to two things: the rule of law and the constitution,” Brat continued. “If you are yes to the rule of law, you are no to illegal immigration. And if you are yes to free markets and fiscal discipline, you are against busting spending caps. It’s about who controls the narrative. We are the party of ‘yes’ for the two principles that made the U.S. the envy of the world.”

The ideas they want to pursue in 2016 are familiar. House Speaker Paul Ryan has talked all about enacting a new health care law, reforming the tax code, and reining in entitlement programs, proposals the Freedom Caucus supports.

Most Freedom Caucus members are also on board with other, less mainstream, Ryan priorities.

A vast majority of Freedom Caucus lawmakers want to heed Obama’s request for Congress to vote for an authorization of military force this year, although the language they seek would look very different from what the president has asked for.

According to Politico, Ryan is engaged in an aggressive campaign to gauge support in the House to formally authorize a military campaign against the Islamic State, or ISIS.

Ryan should consider the Freedom Caucus a “yes,” although the group is not ready yet to take a formal vote as a group that, if 80 percent of members approved, would make their support of an AUMF an official position.

“The clear majority of the Freedom Caucus believes we need to lead on this issue,” said Rep. Matt Salmon, R-Ariz.

In a slight surprise, some Freedom Caucus members also say they could put aside their distrust of Obama to support his push for criminal justice reform.

A Freedom Caucus board member, Rep. Raúl Labrador, R-Idaho, is a conservative leader on the issue, and the group is especially sympathetic to the views of their ally in the upper chamber, Sen. Mike Lee, R-Utah, who is a major proponent of reducing prison sentences of drug offenders.

“If it’s just rational, good policy, I would be in favor of it,” Brat said of criminal justice reform.

And Brat referred to Ryan’s agenda to combat poverty as “super.”

Members know that few, if any, of their efforts this year will result in bills becoming law, but that misses the point, they say.

“We need to take out our frustration and focus it on making change,” said Rep. Barry Loudermilk, R-Ga. “I’ve been part of the conservative movement for a long time. I was pushing Tea Party-type ideas before there was a Tea Party. It’s gotten to the point where we define conservatism by how many times we push a no button. Let’s start bringing more and more good things to the table. Let’s give the conservative base something to vote for.”

Members from the House and Senate will have a chance to reconcile those dueling methods beginning Thursday, when the GOP begins its annual retreat in Baltimore.

“Paul Ryan is saying, ‘I want to make the country better,’” Brat said.

“Mitch McConnell is all political. He doesn’t want to make politicians nervous; he doesn’t want to lose seats or his job. It looks to me like his reference point is off. We are here to serve the American people.”