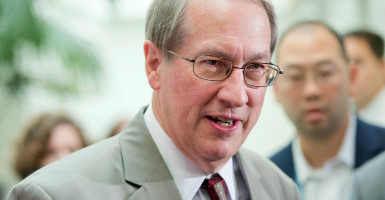 Rep. Bob Goodlatte, House Judiciary Committee chairman, says a criminal justice reform deal must include a provision related to criminal intent, known as "mens rea," or else it is "not going anywhere." The White House opposes this provision. (Photo: Tom Williams/CQ Roll Call/Newscom)

As President Barack Obama prepares to deliver a State of the Union address that is certain to include a nudge for Congress to act on its pledge to reform the criminal justice system, some outstanding roadblocks remain.

That was made clear Tuesday, when the chairman of the influential House Judiciary Committee said legislation won’t pass in the lower chamber of Congress unless it contains a controversial provision requiring prosecutors to prove that certain criminal suspects knowingly intended to break the law.

“I think a deal that does not address this issue is not going anywhere in the House of Representatives,” said Rep. Bob Goodlatte, Judiciary Committee chairman, who was speaking about criminal justice reform at an event hosted by The Atlantic.

A push by Obama and both parties in Congress to reduce mandatory minimum prison sentences for low-level drug offenders is the centerpiece of the larger criminal justice reform effort.

But some influential Republicans believe that their colleagues won’t agree to ease drug sentences unless it is included in a package that contains a provision dealing with the intent requirement, known as “mens rea,” the Latin phrase for “guilty knowledge” or “guilty mind.”

The catch: The White House is opposed to expanding a requirement to prove mens rea, arguing that it would make it harder to prosecute corporations that commit fraud, taint food, or pollute the environment, because these violators could allege they didn’t intend to break the law.

The disagreement over mens rea could kill the entire effort, which is especially fragile because some have suggested that Congress and Obama have a short time frame to act on criminal justice reform as the rhetoric of the 2016 presidential campaign heats up.

Goodlatte, R-Va., and other supporters of mens rea believe that the issue is a matter of fairness, and that it is too easy for people to unknowingly violate obscure federal laws.

“To me, the core of criminal justice is the requirement that someone not go to prison if they don’t have criminal intent,” Goodlatte said. “It is happening today, and it should not happen, and it has to be part of the reforms we do.”

Prosecutors already must prove that defendants intended to commit crimes such as murder, robbery, and assault.

The Senate Judiciary Committee, meanwhile, has passed its own criminal justice reform legislation that does not add more mens rea requirements. The Senate’s bill would reduce mandatory minimum prison sentences for certain nonviolent drug offenses and allow well-behaved inmates to earn time off their prison terms.

Its package would also require the government to conduct a study demonstrating how often prosecutors obtained convictions for crimes without criminal intent provisions.

The full House and Senate have not yet taken up the reform bills, and the two chambers will have to eventually reconcile their differences for legislation to get to the White House.

House Speaker Paul Ryan, R-Wis., has cited criminal justice reform as one of his main priorities this year, while Senate Majority Leader Mitch McConnell, R-Ky., has been non-committal.

In a sign of the urgency to get something done on the issue soon, advocates from both sides are portraying optimism.

In December, Mark Holden of Koch Industries, one of the biggest criminal justice reform proponents on the conservative side, met with Obama’s senior adviser Valerie Jarrett to smooth over disagreements.

Brothers Charles and David Koch have been among the biggest supporters of the mens rea provision. Some critics have questioned their motives, alleging that the conservative billionaires want to prevent federal regulators from pursuing criminal complaints against the family’s energy and industrial companies.

Holden, in a recent interview with The Daily Signal, denied those allegations and said the Kochs could support a criminal justice reform deal that does not include a mens rea provision.

“We think we need criminal intent standards,” Holden said. “No one should lose life, liberty, and the pursuit of happiness unless they intend to commit a crime. We don’t think that’s just, moral, or constitutional. All that being said, we have supported the Senate bill, and that does not deal with mens rea issues. Our position is if it’s in there, great; if not, let’s get something done.”

While Goodlatte said the House is discussing with the Senate and the White House ways to find common ground on the mens rea issue, the resistance to compromise is strong for some Republicans.

“Mens rea is something that is non-negotiable for us,” said Rep. Raúl Labrador, R-Idaho, a conservative member of the Judiciary Committee, in an interview with The Daily Signal.

“The president wants to only do what he likes, and we are telling him there are concerns we also have, and one of those concerns is mens rea, and we have to make sure we do it.”

Goodlatte believes there is a way forward to send legislation the president will sign—even as the mens rea issue threatens to tear the alliance apart—but the chairman won’t put a timeline on solving the dispute.

“Not only do I think it’s overcomable, but I think it has to be overcome,” Goodlatte said. “With things that are truly bipartisan, I don’t think there is a time limit on that, but I do want to get it done as quickly as possible. It is absolutely critical all of the elements are included in this process, or the process will bog down and fail.”