Find Out How Your Senators Voted on the Government Spending Bill 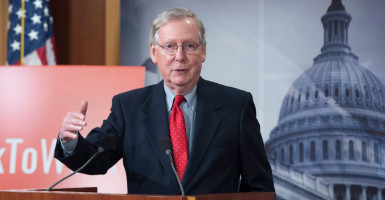 Just before going home for the holidays, Congress passed a $1.8 trillion tax and spending package to fund the federal government and avoid a shutdown.

On Friday afternoon, shortly after the House approved accompanying legislation, the Senate passed the massive budget bill by a vote of 65-33.

>>> Here Are the 95 Republicans Who Opposed the Omnibus Spending Bill

Twenty-six Republican senators, along with one independent and six Democrats, voted against the government spending bill.

Here is a list of senators and how they voted: Exactly a week before Christmas, the Senate passed the omnibus budget bill before heading home.

After the vote, Majority Leader Mitch McConnell, R-Ky., congratulated his colleagues, saying: “The Senate has wrapped up a successful year under new leadership, and we achieved some significant bipartisan accomplishments, including the measure we passed today.”

Our omnibus goals were: roll back sequester, parity in funding for Pentagon and middle class, and keep off poison pill riders. We did that.

Sen. Ted Cruz, R-Texas, criticized the legislation in a statement after the vote, saying it “effectively forfeits our massive Republican victories of 2014 and cements [President] Obama’s priorities for nearly the full remainder of his term.”

Opponents lost an opportunity to delay or derail the legislation.

Senators did not have the benefit of the regular 30 hours of debate customary after the body votes to invoke cloture, a procedural motion to advance debate.

To rush the legislation through, Politico reported, McConnell went to the floor and asked consent to collapse that time, effectively eliminating time for debate.