Here Are the 95 Republicans Who Opposed the Omnibus Spending Bill 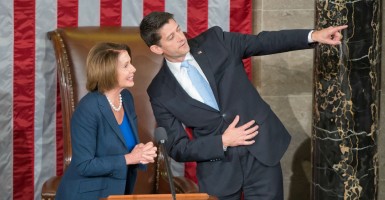 The $1.1 trillion omnibus spending bill sailed through the House on Friday by a vote of 316-113.

Ninety-five Republicans split with House GOP leadership to vote against the spending bill. Another 150 Republicans supported it, while just 18 Democrats opposed it.

Here is the full list of the Republicans who voted against the spending bill (see the complete roll call vote here):

The package of spending and tax extenders represented the combined efforts of House Speaker Paul Ryan and Democrat Minority Leader Nancy Pelosi, D-Calif. After lengthy negotiations, the two hammered out the deal, and then whipped up bipartisan support for the package.

>>> How Your Senators Voted on $1.1 Trillion Spending Bill

Before the vote, conservatives criticized provisions discovered in the bill and complained about policy riders left out of the legislation.

“This product is disappointing, very disappointing. Everyone understood the Syrian refugee issue was so winnable,” he said. “When you had a veto proof majority, and to not include it, that makes no sense.”

Jordan was referring to refugee legislation passed in the House by a vote of 289-137 in November, with 47 Democrats voting for the legislation.

That legislation, however, was not bundled into the omnibus.

Jordan and other conservatives complained about inclusion of provisions that increase the number of foreign guest workers who can qualify for H-2B visas. They also balked at the inclusion of the Cybersecurity Act.

Earlier this week, House Democrats cited their ability to beat back 150 conservative policy riders as a major victory. Additional conservatives amendments submitted to the House Rules Committee were also rejected and kept from the bill.

Since picking up the gavel just six weeks ago, Ryan has instituted a number of changes to return the House to what lawmakers consider regular order—a reform effort applauded by some conservatives.

Lawmakers have been racing to reach a spending deal before the end of the year to fund the government and avoid a shutdown. During that process, Ryan actively sought input from rank-and-file members during listening sessions and policy conferences.