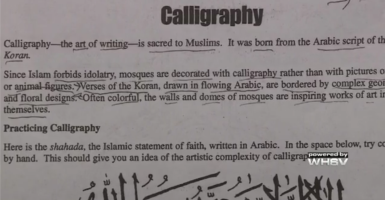 A local dispute over a high school homework assignment made national headlines when parents in Virginia complained that a teacher was attempting to “indoctrinate” their children with the Muslim religion.

“The sheet she gave out was pure doctrine in its origin,” Kimberly Herndon, mother of a 9th grade boy at the high school, told ABC affiliate WHSV.

“I will not have my children sit under a woman who indoctrinates them with the Islam religion when I am a Christian.”

The controversy began at Riverheads High School in Staunton, Va., when students in a world geography class were asked to copy the Islamic statement of faith as a way to give students “an idea of the artistic complexity of calligraphy.”

The statement of faith translates as follows, according to CNN: “There is no god but Allah, and Mohammed is the messenger of Allah.”

The school said that the homework assignment led to “voluminous phone calls and electronic mail” from parents in the district and beyond. Eventually, out of abundant caution, the local sheriff’s office and school administration decided to close Augusta County schools on Friday, Dec. 18.

“While there has been no specific threat of harm to students, schools and school offices will be closed Friday, December 18, 2015,” the administration said in a statement.

All schools shut down in a Virginia county over Islam homework assignment: https://t.co/GiTJsnW9wx pic.twitter.com/YafXPkKUkB

Some parents called for the teacher, Cheryl LaPorte, to be fired. Others created a Facebook page in her support, arguing that people were overreacting to the situation.

According to The News Leader, a local newspaper in the area, LaPorte did not design the homework assignment herself. “The calligraphy assignment came from a workbook created by teachers called ‘World Religions,’” reporter Megan Williams noted.

Augusta County Public School apologized that the incident disrupted school on Friday and said that “no lesson was designed to promote a religious viewpoint or change any student’s religious belief.”

“Although students will continue to learn about world religions as required by the state Board of Education and the Commonwealth’s Standards of Learning, a different, non-religious sample of Arabic calligraphy will be used in the future,” the administration added.

The incident has opened a discussion about who has control over public school curricula.

“In a real free market, schools would specialize and offer a diversity of curricula, enabling parents to be able to find a school that works for them,” Mary Clare Reim, an expert in education policy at The Heritage Foundation, said.

One-size-fits-all assignment by zip code public schools, by their nature, will have difficulty satisfying the various needs of American families. School choice creates a diverse market for educational options. Parents who want their children to have access to a specialized curriculum should be able to do so. Our current system of public education too often ignores the personal preferences of American families.