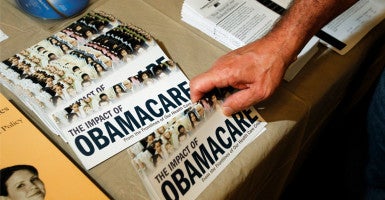 Republicans included a provision in the $1.1 trillion omnibus that would restrict the Centers for Medicare and Medicaid Services' access to taxpayer dollars for the risk corridor program. Similar language was included in last year's bill, and as a result of lower-than-expected payments from the program, a dozen co-ops created under Obamacare collapsed. (Photo: Jessica Rinaldi/Reuters/Newscom)

A provision of the omnibus spending bill prohibiting taxpayer dollars from being used to “bail out” insurers under Obamacare’s risk corridor program could jeopardize the future of the co-ops created under the health care law.

The language mirrors that included in last year’s government spending bill, which prohibits the Centers for Medicare and Medicaid Services from using taxpayer dollars to make up any difference between what insurers incurring losses request and what is put into the program by those that are profitable.

And though health policy experts predicted such action from Congress, smaller insurance companies like Obamacare’s co-ops could find themselves in financial trouble should they experience losses.

“It’s very problematic and challenging for small plans, and particularly the co-ops,” Caroline Pearson, senior vice president at Avalere Health, told The Daily Signal. “The issue really is because the co-ops only have exchange business, they can’t spread the losses associated with the risk corridors across premiums in other channels or other markets, and so, as a result, they just cannot make up the shortfalls that are likely to occur as a result of the risk corridors.”

In addition to implementing the risk corridor program, the health care law also authorized and funded the creation of 23 consumer operated and oriented plans (co-ops). Of the 23 nonprofit insurers created, 12 have closed their doors, with many attributing their decision to the risk corridor program after receiving just 12 percent of their requested amounts.

More than 1 million Americans were insured by the co-ops, and they received a total of $2.5 billion in loans from the government.

“We expected they weren’t going to get the money, but that’s likely to continue to be a problem,” Pearson said of the language in the omnibus. “Really, any plan that is mostly operating in the individual market, any of the local plans, it’s a huge problem for them.”

Contrary to the co-ops, which sell coverage primarily on the federal and state-run exchanges and operate only in the health insurance market, larger insurers are likely to fare better should they receive less from the risk corridor payments than anticipated next year.

Pearson said national carriers likely weren’t expecting to receive the full payments in 2014 and will assume the same for payments for 2015 and 2016.

“They will just spread that across premiums across all businesses, and they can absorb [the losses],” she said. “They’re still upset, but they can manage through it.”

‘Not Counting On It’

Ed Haislmaier, a health policy expert at The Heritage Foundation, disagreed that the remaining 11 co-ops would feel the squeeze should they receive less in risk corridor payments again.

Haislmaier said those that have survived did so because they weren’t counting on the money.

“That doesn’t mean they’re out of the woods elsewhere,” he told The Daily Signal, “but a lot of these insurers haven’t been counting on the money that’s still in there.”

For example, HealthyCT, Connecticut’s co-op, did not rely on payments from the risk corridor program to make up losses it incurred in 2014, Ken Lalime, its chief executive officer, told The Daily Signal. The co-op fared better than most last year and is not counting on 2015 payments.

“It was one of the tools to allow all insurers to be able to take on unknown risk,” he said of the risk corridors. “Without it in place, it does make things a little more complicated. We’d love the [full funding] to come back, but we’re not counting on it.”

Lalime said there’s “not a lot of confidence” the program has a long-term future, but he does hope Congress will act to reinstate the original language.

“The co-ops in general have just done a fabulous job in bringing new ideas, innovation, and additional competition to the marketplaces. I think we’ve brought an awareness to the marketplace that you can do some of these things and step into a space that’s ill-defined,” Lalime said. He continued:

I’m proud of those that could, but I feel bad for those that relied on funding from a component of the premium stabilization [the risk corridor program], and that was unable to be funded at a full rate.

Despite their disagreement on how the risk corridor program will affect the remaining co-ops, Pearson and Haislmaier agreed that consumers are likely to see increased premiums in 2017 as insurers decide how to address losses and the potential for lower risk corridor payments.

“There’s only so much that [insurers] can increase premiums,” Pearson said. “They’re limited, but we’re seeing larger 2016 increases in the exchange markets as it is, and that’s likely to continue in 2017. I expect two years of double-digit increases.”

Haislmaier said insurers were likely to increase the cost of plans either way as they got used to the market. However, the change in risk corridor funding likely speeds it up.

“This accelerates it marginally as opposed to delaying it,” he said.

The risk corridor program is in effect until 2017. The program seeks to provide stability in the health insurance market by spreading the risk insurers may incur by providing coverage to more unhealthy and costly patients than in the past.

Under the program, insurance companies that make an excess profit pay into a fund operated by the federal government. Those that incur excess losses, meanwhile, receive money from the fund.

If there is a shortfall between what insurers pay into the program versus what insurers who lost money request, taxpayer dollars cover the difference.

The Obama administration announced in October that the risk corridor program would pay $362 million to insurance companies who incurred excess losses. Those insurers requested $2.87 billion, leaving a $2.5-billion shortfall taxpayers—through the original design of the program—would have covered.

Inclusion of language regarding the risk corridor program is considered a victory for conservative lawmakers and outside groups, who pushed House and Senate leaders to eliminate the federal government’s ability to use taxpayer dollars to pay insurance companies suffering excess losses.