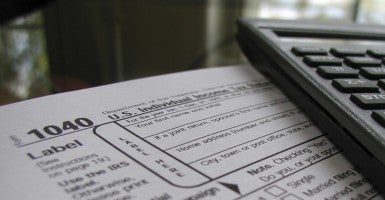 The taxpayers’ leading voice at the Internal Revenue Service is warning that the tax agency is delaying refunds for “tens of thousands” of Affordable Care Act enrollees because it’s missing data from state-run health insurance exchanges.

National Taxpayer Advocate Nina Olson spoke about the delays at the American Payroll Association’s Capital Summit in Washington, D.C. Olson told attendees that the delays were caused by missing subsidy data from the state insurance exchanges.

According to Olson, the tax refunds have been “held for quite a long time, since the beginning of the filing season.” For concerned taxpayers calling the IRS with questions, Olson said employees were instructed not to divulge information as to why their refunds are suspended.

“Early this filing season, some tax returns that claimed the premium tax credit were briefly held for additional review,” Ubon Mendie, spokesman for the IRS, said in a statement to The Daily Signal. “As of last week, the IRS is either processing these returns regularly or sending correspondence to taxpayers to obtain additional information.

Those enrolled in the Affordable Care Act received tax credits based on their estimated income for 2014. However, now that customers have their actual incomes, they must “reconcile” their subsidies with the IRS to ensure they received the correct amounts.

Subsidies are calculated based on the price of the second lowest silver plan for each consumers’ area, and the federal government provides taxpayers with information—through a 1095-A form—about the cost of those plans and how much they received in tax credits.

According to National Taxpayer Advocate Nina Olson, the IRS is delaying refunds for ‘tens of thousands’ of Affordable Care Act enrollees.

For states operating their own exchanges, the state-run marketplaces must provide the IRS with copies of the 1095-A forms so the agency can confirm taxpayers are using the correct information on their returns.

The Daily Signal reached out to all 14 state-run exchanges, the IRS and the Department of Health and Human Services for comment, but most did not respond to email and phone inquiries. Kathy Tallarita, spokeswoman for Connecticut’s exchange, Access Health CT, told The Daily Signal the exchange mailed all customers their 1095-A forms by Jan. 30. However, there were “minor” glitches with documents received by approximately 3,600 customers. Access Health CT fixed those errors, and Tallarita said all issues were resolved by the end of February.

However, she was unsure if the exchange sent the forms to the IRS.

A spokesman with Idaho’s exchange, Your Health Idaho, told The Daily Signal the state-run marketplace will be sending out 1095-A forms next filing season. Your Health Idaho used HealthCare.gov last year and therefore didn’t issue the documents.

This tax filing season is the first since the Affordable Care Act’s implementation. It is the first time consumers will have to reconcile the subsidies they received under the law. Last month, the federal government announced that close to 1 million HealthCare.gov customers received the wrong information on the 1095-A forms they sent out.

Government officials requested those who were affected by the error to delay filing their taxes. For the 50,000 who already did so, the agency said they would receive additional information from the Department of the Treasury.

Ed Haislmaier, a health policy expert at The Heritage Foundation, told The Daily Signal the government’s error could present issues for taxpayers, because they need the information to file their taxes.

“These people will not be able to file their taxes, and they will be in limbo–if they owe money, if they’re getting a refund–until all of this is completed,” he said. “Some probably will not be happy campers.”

>>> Commentary: The Damaging Effects of Obamacare