How Our Refugee Vetting Process Works 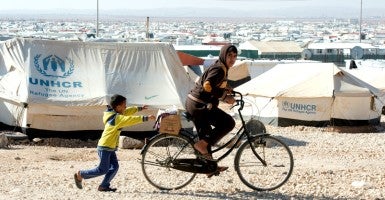 With several high-profile terrorist attacks around the world including Paris and San Bernardino, Calif., many have raised serious concerns about how well individuals entering the U.S. are screened.

In particular, a lot of focus has been paid to the refugee process. Americans are understandably worried that terrorists might use any and all opportunities to enter the United States.

So what does the refugee vetting process look like?

First, most applicants apply for refuge through the U.N. High Commissioner on Refugees (UNHCR). UNHCR then forwards some applications to the U.S. State Department, which prepares these applications for adjudication by Department of Homeland Security’s U.S. Citizenship and Immigration Services (USCIS). Once an applicant is referred to the State Department, biometric and biographic checks are done against various U.S. security databases at multiple points throughout the process.

Multiple agencies’ systems and databases are incorporated in this process, including:

In addition, the refugee process requires a Security Advisory Opinion to be completed by the FBI and the intelligence community on many refugee applicants who are considered higher risk. Similarly, inter-agency checks (IACs) are constantly being done in connection with a wide range of U.S. agencies.

In additional to these background checks, U.S. Citizenship and Immigration Services conducts a refugee interview. These interviews cover everything from refugee and immigration matters to security- and country-specific questions.

For example, Syrian refugee officers must undergo a one-week training course on Syria-specific issues, including classified information. Additional scrutiny is already being applied to Syrians through the enhanced review for Syrian applicants’ process that puts additional security and intelligence resources at the disposal of adjudicators.

Only at this point can an application be approved. For those that are approved, health screenings and orientations begin. The State Department and Office of Refugee Resettlement within the Department of Health and Human Services work with voluntary resettlement agencies to arrange for resettlement services and assistance.

After an average of 12 to 18 months, this process ends with entry into the U.S. According to the Department of Homeland Security, of the approximately 23,000 Syrian referrals made by the U.N. High Commissioner on Refugees to the U.S., only about 2,000 have been accepted. The U.S. refugee system can be, should be, and is being picky about whom we allow to enter the U.S. as a refugee.

Some have focused on comments by FBI Director James Comey that supposedly invalidate this screening process.

Here is what Comey said:

If someone has never made a ripple in the pond in Syria in a way that would get their identity or their interest reflected in our database, we can query our database until the cows come home, but there will be nothing show up because we have no record of them.

What should be made of this comment? As with any comment, its context should be examined. Just before Comey said this, Nicholas Rasmussen, the head of the National Counterterrorism Center; Jeh Johnson, secretary of the Department of Homeland Security; and Comey spent ample time discussing what was being done to mitigate risks such as the risk posed by individuals who have “never made a ripple.”

The U.S. has made constant improvements to the program, learning from mistakes such as when, in 2009, two Iraqi terrorists were caught in the U.S. after slipping through the vetting process. It is worth noting that these are the only two individuals who have slipped through.

Is it enough? Is our government doing adequate due diligence? These are the key questions.

That’s why the best recommendation for Congress right now is to demand detailed information from the administration on how risks are being mitigated. The administration should remain selective in the refugees it accepts, focusing on those applicants about whom the U.S. has an acceptable amount of intelligence.

While this process is even more rigorous than most other visa programs, after the attack in San Bernardino, the American people deserve and Congress should request details about how all forms of vetting can be and should be constantly improved. The government owes it to its citizens to use all lawful tools at its disposal to prevent terrorist travel.

Americans deserve a responsible program so they can continue to support refugees while also addressing real security concerns.