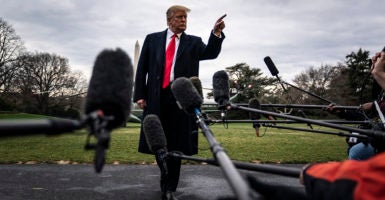 President Donald Trump stops to talk to reporters and members of the media as he walks to Marine One to depart from the South Lawn at the White House on March 22, 2019, in Washington, D.C. (Photo: Jabin Botsford/The Washington Post/Getty Images)

It was a hypothetical question about getting information on a political opponent from a foreign national. Yet President Donald Trump’s response sparked a furor—one that was long on accusations and short on the actual law governing federal campaigns.

Here’s the bottom line: A federal candidate who is freely given information is not receiving a “contribution” or “thing of value” and is thus not violating federal campaign finance law or the regulations issued by the Federal Election Commission. I know. I served as an FEC commissioner.

If getting dirt on an opponent were a “thing of value,” then any adverse information concerning a candidate—even informed criticism of a rival’s policy proposals—would also have to be considered a “thing of value,” and both would have to listed as a financial “contribution” to a campaign.

Such a broad interpretation of the law would be potentially unconstitutional and impractical to administer or enforce. Moreover, it is not a position that has been taken by the FEC.

Federal law (52 U.S.C. §30121) prohibits a foreign national from contributing or donating money or a “thing of value” to a federal, state, or local candidate or political committee.

Foreigners are also banned from engaging in independent political expenditures.

That means that the Chinese government, for example, can’t give money directly to a candidate, nor can it buy an ad in The New York Times telling Americans they should vote for or against a particular candidate.

This ban doesn’t prevent foreign nationals from volunteering to help a campaign, as long as the foreigner does not “dictate, control, or directly or indirectly participate in the decision-making process” of the campaign under a regulation issued by the FEC (11 CFR §110.20).

The federal statute also says that the term “contribution” does not include an “individual who volunteers to behalf of a candidate.”

The FEC specifically notes that a foreign national “may volunteer personal services to a federal candidate or federal political committee without making a contribution.”

According to prior FEC enforcement actions and advisory opinions, this means that a foreign national can, for instance, develop intellectual property such as a website, logos, and trademarks for a campaign as a volunteer (Advisory Opinion 2014-20, Make Your Laws PAC).

Under the FEC’s reasoning, a foreigner who volunteers could also do research and share the results with the campaign.

Furthermore, foreign volunteers can speak at campaign events and even solicit contributions for a federal candidate as long as they solicit only Americans and not other foreigners (Advisory Opinion 2004-26, Weller).

Why, a talented foreign musician can even contribute an uncompensated performance at a candidate’s fundraiser (Matter Under Review 5987)—as Elton John did at a Radio City Music Hall concert that raised $2.5 million for Hillary Clinton’s campaign.

A foreign national who simply volunteers to provide information to a campaign would certainly seem to fall within this regulatory exemption.

However, the FEC says that this exemption for a foreign volunteer applies only “as long as the individual performing the service is not compensated by anyone.”

Makes you wonder why the FEC hasn’t investigated a certain presidential campaign in 2016 that allegedly paid a former British intelligence agent (i.e., a foreigner) to do political opposition research, doesn’t it?

Information freely received from a foreigner is not a money contribution or donation. So does it fall within the “thing of value” phrase in the federal statute? It does not.

That phrase has been used by the FEC to go after individuals who make valuable in-kind contributions to campaigns that are the equivalent of direct dollar donations.

For example, if a landlord provides rental space to a campaign free of charge, that would certainly be a “thing of value.”

The candidate would have to report the fair market value of that rental space as a contribution to her campaign and the source of the free rent could not be a corporation—or a foreigner.

Treating information as a financial contribution would bring up constitutional issues.

How could anyone provide a campaign with any information or advice without running the danger of it being considered a financial contribution?

Such a view of information as a “thing of value” would be difficult to enforce, too. When the FEC considers whether an in-kind contribution (such as the free rental space mentioned previously) has been made, it must determine the fair market value of the contribution.

That can be difficult even when the in-kind contribution is something tangible like free office space. But how do you determine the fair market value of information?

An individual could spend a million dollars doing opposition research on his own that finds out that a candidate is a perfect angel; if he gives that information to the candidate’s opponent, what is it worth? If there is nothing that can be used against the candidate, does the information have zero value to the campaign?

Or what if potentially damaging information is given to a candidate and then becomes public, but has no discernable effect on the election? Did that information have any value? And how is the FEC to judge the extent—if any—to which specific information affected an election?

As a former commissioner who was faced with making such determinations in enforcement cases, I can assure you that trying to determine the fair market value of information would be very problematic and subject to widely differing views among the six commissioners who govern the FEC.

You can debate the wisdom of any candidate deciding to review information voluntarily provided by a foreign national. But the claim that what the president said he would do is illegal and a violation of federal campaign finance law is highly dubious.

On the other hand, paying for such information—such as hiring a foreign national to gather opposition research on another candidate and using other foreign nationals to infiltrate the campaign—would be a violation of the law under the FEC’s prior precedent.