Why Congress Must Question US Counterterrorism Policies in Pakistan 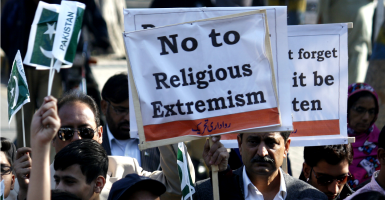 Pakistani students, teachers and civil society activists carry signs as they march during a rally to pay tribute to the victims of the Peshawar school massacre of Dec. 16, 2014. (Photo: Rana Sajid Hussain/ZUMA Press/Newscom)

The newly appointed U.S. State Department Representative for Afghanistan and Pakistan Ambassador Richard Olson will testify tomorrow before a hearing of the House Foreign Relations Committee on “The Future of U.S.-Pakistan Relations.”

U.S. congressional members must question Olson about the failure of U.S. policy to bring Pakistan in line with U.S. counterterrorism objectives and what that means for the future security of the U.S. homeland.

The links of San Bernardino shooter Tashfeen Malik to extremist networks inside Pakistan has been highlighted in recent weeks. Yet no one should be surprised about Malik’s radicalization, given the proliferation of extremist ideologies in Pakistani schools and universities and the Pakistani security establishment’s failure to crack down on violent Islamist groups that attack India and Afghanistan.

Malik attended a religious school, the Al Huda Center, in Multan, Pakistan, from April 2013 to May 2014, and her family was known to have connections to radical Islamist groups. Media reports claim the Al-Huda centers in Pakistan have radicalized thousands of Pakistan women, including the wives of senior Pakistani military officers.

The Pakistan military should be lauded for its operations against the Tehrik-e-Taliban Pakistan (TTP), which a year ago attacked a military school in Peshawar, killing over 130 children. But the Pakistani crackdown has not included other terrorist groups like the Lashkar-e-Taiba (LeT) and the Haqqani network (both U.S.-designated Foreign Terrorist Organizations). Indeed, in April of this year, Pakistan released from jail the LeT mastermind behind the 2008 Mumbai attacks, which killed 160, including six U.S. citizens.

The U.S. must reduce its military aid to Pakistan until it demonstrates willingness to crack down on terrorist groups like the LeT and Haqqani network. The U.S. is beginning to move in this direction and is set to withhold $300 million in Coalition Support Funding (CSF) for Pakistan this year because of its failure to crack down on the Haqqani Network. This is a step in the right direction.

Washington must continue this momentum by employing a combination of incentives and disincentives to convince Pakistan to take a comprehensive approach to fighting terrorism and to finally end its policy of selectively targeting only those groups that attack the Pakistani state.

Not only will this improve regional stability, but it would diminish the chances of another San Bernardino type of attack in the U.S. homeland. For far too long, Pakistan’s dual policies toward terrorism have been putting the rest of the world at risk.