Time to Be Frank: Linking Terrorism and Climate Change Is Ridiculous 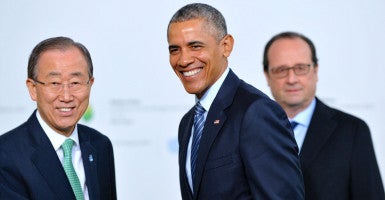 President Obama certainly knows how to use a red-hot news hook to highlight his agenda.

This week, during the United Nations Conference on Climate Change in Paris, he appeared to conflate climate change with terrorism. Coming hot on the heels of the ISIS massacres in the “City of Light,” that kind of rhetoric was bound to get people’s attention.

In a CBS This Morning interview, he asserted that global warming will put people in desperate straits. And when “human beings are placed under strain,” he added, “then bad things happen. And if you look at world history, whenever people are desperate …  that’s when ideologies arise that are dangerous.”

In addressing terrorism (aka dangerous ideologies) in the same breath as global warming, Obama leaves the impression that the two are connected. But a close reading shows that he stops short of claiming a direct cause-and-effect relationship between the two issues.

In Paris, for example, he framed the need for international cooperation on climate issues like this: “And in some ways, it [climate change]’s akin to the problem of terrorism and ISIL.” “In some ways” and “akin” are weasel words that suggest a linkage without really making one.

The administration has a habit of gauzily tying global warming to rising terrorism. In Paris, Deputy National Security Adviser Ben Rhodes argued that “the instability that we see in parts of Africa and the Middle East … can be magnified by the effects of climate change and extreme drought and extreme disruption.” And in October at the Universal Exposition in Milan, Secretary of State John Kerry said, “Now, I’m not telling you that the crisis in Syria was caused by climate change. … But the devastating drought clearly made a bad situation a lot worse.”

The claim is always carefully hedged, but clearly the White House wants us to believe that climate change—once it really kicks in—will create or exacerbate all sorts of national security problems, including terrorism. It’s a great technique for generating a sense of urgency.

But the rhetorical construct, while interesting, is weak.

There seems to be no strong quantitative (i.e., empirical) evidence to prove a cause-and-effect relationship between changes in the climate and conflict. Moreover, as others have noted, how humans respond to change—be it climate change or any other type of change—is a matter of choice, not destiny.

Violent conflict aimed at grabbing land and other natural resources is certainly one possible response. But so, too, is cooperation. Indeed, that’s exactly what the nearly 200 countries are trying to do at the Paris climate conference. The administration must believe that cooperation is a viable response. Otherwise, why burn the fuel to fly to the Paris negotiations?

Climate change activists have been trying to create a sense of urgency about their concerns for nearly 50 years. It’s what sparked the first international Earth Day activities—only then the alarm was over global cooling.

While doomsday predictions still crop up (Al Gore, you’ll recall, warned us that the northern polar ice cap could be gone by now), most climate experts believe that any changes in climate will occur gradually, giving governments significant time to respond with various instruments of national power—diplomatic, informational, or economic. Military action is by no means the only option out there, and far from the most affordable or desirable.

Indeed, considering how the administration stresses the primacy of diplomacy—whether it’s in dealing with the Iranian nuclear threat or reaching a political settlement in Syria—the idea that the world community can work together to tackle a challenge should appeal to it.

It’s understandable—and convenient—for the White House to bundle terrorism and climate change in the same messaging. Mentioning violent extremism is guaranteed to spike the attention paid to climate, an issue of high importance to team Obama but ranked at the bottom of polls asking about issues of most concern to the American people.

But it’s substantively wrong to link climate change and terrorism—whether directly or indirectly. And relating the two to create a sense of national security urgency is not only misleading—it’s dangerous, because it distracts us from today’s very real, very immediate life-and-death threats from terrorism.