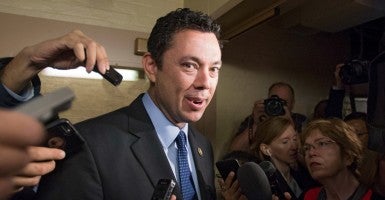 A proposal by Rep. Jason Chaffetz, R-Utah, could compel companies to collect sales taxes for a state where their customers live. (Photo: Michael Reynolds/EPA/Newscom)

On the eve of Congress’ Christmas recess, two lawmakers have renewed an effort to give states the power to collect online sales taxes from out-of-state vendors.

That legislation likely will prove heavy lifting, though, for Sen. Lamar Alexander, R-Tenn., and Rep. Jason Chaffetz, R-Utah, as a preoccupied Senate and House scramble to hammer out a budget deal before the holidays.

In the House, where individual committees take the lead in drafting major legislation, Judiciary Chairman Robert Goodlatte, R-Va., has been hesitant to move on Chaffetz’s proposal.

But the duo remain upbeat that they can advance the legislation during the omnibus appropriations process.

“I’m really optimistic on this one,” Chaffetz told CQ Roll Call. “It’s up to the appropriators now.”

So far, GOP leadership has remained quiet on this issue.

The Utah Republican first ignited the debate in July, when he introduced the Remote Transactions Parity Act. At the time, Chaffetz said the legislation aimed to restore the balance between traditional brick-and-mortar businesses and online retailers.

“The current tax loophole skews the free market,” Chaffetz said in July. “It allows businesses that employ fewer people and contribute to the economies of fewer states to avoid collecting sales taxes.”

At issue is whether, as Alexander and Chaffetz propose, a state may compel an out-of-state retailer or other vendor to collect sales taxes from its residents. Should Ohio, for example, be able to force an online Indiana business to collect the Buckeye State’s sales tax from customers who live in Ohio?

In the 1992 case Quill v. North Dakota, the Supreme Court ruled that a state can’t do that. Instead, taxation is tied to geography, the court ruled: A business incurs the burden of collecting sales tax only if it has an actual physical presence in that state.

Now online retailers on both sides of the issue are crowdsourcing support for and against the legislation.

Some large electronic commerce conglomerates such as Amazon.com support an online sales tax—and they’re already enforcing it. In 26 different states since February, the Internet’s largest retailer has collected from the consumer and returned sales tax to those governments.

A sales tax likely wouldn’t come as a shock to consumers. A 2013 market research study found that half of online shoppers already paid sales taxes. But it could prove a logistical logjam for small online businesses.

On Friday, eBay came out swinging in opposition, encouraging its users to “tell Congress not to pass harmful year-end sales tax legislation.”

The online auctioneer warned that the measures in the Senate and House would force online retailers “to adhere to tax laws in more than 9,600 tax jurisdictions” and prepare for the risk of “audits and enforcement by far-away state tax enforcement agencies.”