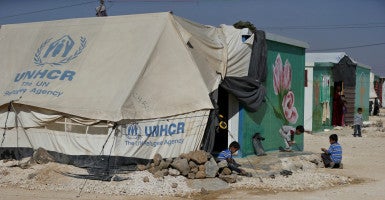 Syrian refugees play in front of their families' painted containers at the Al Zaatari refugee camp, in the Jordanian city of Mafraq. (Photo: Muhammad Hamed/Reuters/Newscom)

Conservative leaders, including a former U.S. attorney general and a previous chairman of the House Intelligence Committee, are warning that the United States is putting its national security at risk unless it strengthens the vetting of Syrian refugees.

The 66 leaders who signed Monday’s memo from the Conservative Action Project believe that currently, “there is no possible way to verify the identity and credibility of Syrian refugees,” which creates a “grave national security threat” to the United States.

The memo cites FBI Director James Comey’s testimony before the House Committee on Homeland Security last week. Comey “clearly indicated that the FBI does not have the ability to conduct thorough background checks on 10,000 Syrian refugees,” the memo noted, adding:

Of the challenge in verifying the identity of a Syrian refugee, he said, ‘And so if someone has never made a ripple in the pond in Syria in a way that would get their identity or their interest reflected in our database, we can query our database until the cows come home, but there will be nothing show[ing] up because we have no record of them.’

“Given the current climate around the globe,” the conservative leaders write, “a refugee population so large, fleeing a war-torn region, with ample evidence that a group of Syrian refugees is much more likely to contain Islamic Extremists bent on violence in America creating a completely unsecure, dangerous, and untenable situation for the American people.”

With hope that Congress will place a pause on accepting any new Syrian refugees, the memo states that Congress should work with intelligence agencies and create a vetting process to make sure “our refugee laws do not make us less safe.”

“We must be able to verify that any individual seeking any immigration status does not pose a threat to this nation,” says the memo.

The conservative leaders also offer alternative choices to help refugees, such as humanitarian support to individuals in refugee camps in the Kurdistan region of Iraq.

Recent terrorist attacks in Paris have turned eyes in the United States toward these refugees and the threat they pose. The attacks in Paris were “organized, conceived and planned” from Syria, according to French Prime Minister Manuel Valls, reports The Washington Post.

While President Barack Obama has compared the Syrian refugees to the pilgrims who first fled to America, more than 30 governors have pledged to block Syrian refugees from landing in their states.

Obama’s administration claims that the current refugee vetting process is sufficient yet says it will provide governors with more transparency on refugees.

The U.S. House passed a veto-proof-majority bill to tighten security checks on refugees coming from Syria and Iraq earlier this month. The bill would require the FBI to certify background checks on the refugees.