In Wake of Paris Terrorist Attacks, Here’s a Map of the States Shutting Their Doors to Syrian Refugees 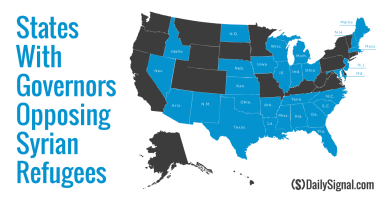 On Monday and into Tuesday, more than two dozen governors moved to block Syrian refugees from entering their states. (Photo: Kelsey Lucas/Visualsey)

In the aftermath of Friday’s terrorist attacks in Paris, governors across the United States are attempting to shut their doors on Syrian refugees looking to find a safe haven in the country.

As of Monday evening, more than two dozen governors announced opposition to policies that would permit Syrian refugees to enter their states amid concerns they could have ties to terrorists.

I just signed an Executive Order instructing state agencies to take all available steps to stop the relocation of Syrian refugees to LA.

In wake of Paris attacks, I'm directing all state agencies to suspend the resettlement of addl Syrian refugees in IN https://t.co/Gtg5ccjMsU

The movement, which was overwhelmingly spearheaded by Republican governors, came after French prosecutors discovered a Syrian passport on one of the suspected Islamic State suicide bombers in Paris. That finding raised concerns that terrorists are embedding with refugees to enter Europe and other nations.

The series of attacks in Paris on Friday night left more than 130 dead and hundreds others injured. French President François Hollande called the attacks an “act of war” and launched airstrikes against ISIS.

President Barack Obama sharply pushed back against the growing number of states attempting to undermine his policies surrounding Syrian refugees, saying Monday at a press conference in Antalya, Turkey, that it would be “shameful” and “not American” to close America’s doors on Syrian refugees.

“When some of those folks themselves come from families who benefited from protection when they were fleeing political persecution, that’s shameful,” he said. “That’s not American. That’s not who we are. We don’t have religious tests to our compassion.”

In September, Obama vowed to accept 10,000 Syrian refugees into the United States next year.

As of Nov. 3, there were more than 4 million registered Syrian refugees, according to the U.N. Refugee Agency.

Those issuing executive orders to block refugees pushed back on the president’s narrative while announcing their decision.

“Michigan is a welcoming state, and we are proud of our rich history of immigration,” said Michigan Gov. Rick Snyder. “But our first priority is protecting the safety of our residents.”

In a letter addressed to the president, Texas Gov. Greg Abbott said, “Neither you nor any federal official can guarantee that Syrian refugees will not be part of any terroristic activity. As such, opening our door to them irresponsibly exposes our fellow Americans to unacceptable peril.”

While their responses send a clear message to the president, John Malcolm, a senior legal fellow at The Heritage Foundation, said the practical implications blocking refugees are limited.

“Governors can certainly order state agencies to stop doing anything to assist federal authorities with their resettlement efforts, but they cannot stop federal authorities from continuing those efforts, nor can they stop immigrants who are lawfully admitted to this country from moving to and settling in those states,” Malcolm said. “They can, however, ask state law enforcement authorities to keep an eye on the refugees who settle in their states, so long as those authorities do so within the bounds of the Constitution.”

“It’s abhorrent for the federal government not to consult with and consider the interests of the states,” added Jim Carafano, a foreign policy expert at The Heritage Foundation. “Particularly the views of governors, as it impacts the welfare and public safety of their citizens.”

[I]t is our understanding that the state does not have the authority to prevent the federal government from funding the relocation of these Syrian refugees to Florida even without state support. Therefore, we are asking the United States Congress to take immediate and aggressive action to prevent President Obama and his administration from using any federal tax dollars to fund the relocation of up to 425 Syrian refugees (the total possible number of refugees pending for state relocation support at this time) to Florida, or anywhere in the United States, without an extensive evaluation of the risk these individuals may post to our national security.

In response, Sen. Rand Paul, R-Ky., introduced legislation on Monday afternoon that would suspend issuance of visas to refugees from countries with a high risk of terrorism until the U.S. Department of Homeland Security meets certain standards. Those standards include fingerprinting and screening all refugees, implement a tracking system “to catch attempted overstays,” and enhancing security measures that are already in place.

“The time has come to stop terrorists from walking in our front door. The Boston Marathon bombers were refugees, and numerous refugees from Iraq, including some living in my hometown, have attempted to commit terrorist attacks,” Paul said in a press release.

“The Syrian refugee program should be suspended until the American people are satisfied that they know exactly who the president is admitting into the country via this program,” Burr said. “There is simply too much at stake, and the security of the American people should be our top priority.”

This article and its accompanying map has been updated multiple times to reflect the growing number of governors who do not wish to permit Syrian refugees into their state.