How the NYPD Works to Counter Terror Threats 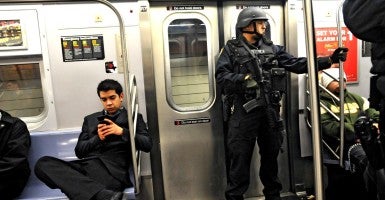 As we saw in Paris and Mali, local law enforcement officers are on the front line of defense against terror. Now that ISIS is threatening similar attacks here at home, police should have a keen understanding of what happened there to inform their efforts here. A unique program devised by the New York City Police Department aims to do just that.

Not satisfied that the FBI (or other federal agencies) would sufficiently share information about foreign incidents with NYPD, then-Commissioner Ray Kelly established his own overseas program in 2003. In his recent memoir, Kelly reflected on his decision to stand up the program in the wake of 9/11: “The terrorists knew no national boundaries. Why should the New York City police?”

The terrorists knew no national boundaries. Why should the New York City police?

The International Liaison Program stations NYPD officers in eleven cities, where they observe their hosts’ law enforcement activities. The officers share information with NYPD to provide situational awareness of incidents abroad and enhance the department’s understanding of threats it may face.

The program is jointly funded by NYPD and charitable contributions. NYPD pays the personnel costs, and the NYC Police Foundation pays lodging, travel, and office expenses. This unique funding model gives the NYPD more latitude in managing the program.

NYPD’s Response to the 2008 Mumbai Attacks

Given that the Paris attacks share many similarities to the 2008 Mumbai terror attacks, the program’s description of its role in the earlier attacks is instructive.

Within days: A new strategy was developed to simultaneously handle multiple attacks.

Within a week: The NYPD alerted its network of private security contacts and gathered valuable records, including floor plans and architectural information as part of a new initiative to protect hotels and other soft targets.

Today: The NYPD continues to conduct emergency response drills based on lessons learned in Mumbai.

Fast-forward to last week’s attacks in Paris, and NYPD officers were strategically positioned there, ready to observe and report their findings back to NYC.

Indeed, the utility of the program was validated just days later, as ISIS publicly declared that New York City was in the terror group’s cross hairs. Because NYPD had been actively involved in the Paris response, the department was ready to act at home.

The Paris attacks likely solidified the program as essential, but when Mayor Bill de Blasio took office in 2014, it was unclear if the mayor would continue the program.

Luckily, earlier this year, de Blasio’s police commissioner Bill Bratton finally reaffirmed his support for it. Said one senior police official at the time: “This is the kind of program that you don’t need until you need it. And when you do, it’s worth its weight in gold.”

Paris a Crucial Test for DHS and FBI Information Sharing

A desire for local control of the information was among Commissioner Kelly’s reasons for establishing the program:

When I was Customs commissioner, we had legats. They fed us valuable information from a perspective we did not otherwise have. I wanted to embed our people as listening posts inside the police departments in other cities in order to protect New York. So we did.

Since the creation of the NYPD program, the federal government established the U.S. Department of Homeland Security and strengthened the FBI’s counterterrorism mission. Both have improved information sharing and collaboration with local law enforcement agencies. However, law enforcement agencies must trust the federal entities to provide them with credible threat information. Otherwise, they may be tempted to establish their own information collection programs abroad.

To forestall a proliferation of local law enforcement liaisons overseas (which is neither feasible nor advisable), DHS and the FBI must meaningfully demonstrate their commitment to sharing their knowledge with local law enforcement. DHS should continue to improve its relationship with the national network of state and major urban area fusion centers. Similarly, the FBI should ensure that its collaborations with state and local law enforcement are sufficiently robust through its Joint Terrorism Task Forces.

The Paris attacks represent an opportunity for the federal government to show to local law enforcement that they can trust the feds to keep them informed of incidents outside their jurisdictions. Otherwise, law enforcement agencies just might find an alternative way to arm themselves with the knowledge they view as necessary to protect us from terrorism.