Don’t Believe the Rhetoric. NAFTA Has Actually Helped US Manufacturing. 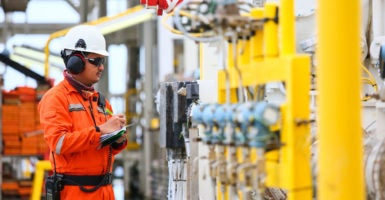 Those who work in U.S. manufacturing have seen a 19 percent boost in per hour real compensation since the passage of NAFTA. (Photo: curraheeshutter/Getty Images)

Vincent Miozzi is a member of the Young Leaders Program at The Heritage Foundation.

President Donald Trump has long railed against NAFTA as an unfair deal that lets foreign competition take advantage of U.S. manufacturers. That narrative is the basis of his recent move to impose steel and aluminum tariffs on several close allies: Canada, Mexico, and the European Union.

The problem is the narrative is simply false.

Post-NAFTA, the manufacturing sector has become bigger and more productive than ever. According to the Bureau of Labor Statistics, real manufacturing output has increased 35 percent since NAFTA was enacted in 1994. Real gross domestic product per manufacturing employee has nearly doubled, rising by 85 percent.

NAFTA has solidified Canada and Mexico’s place as our top trading partners, with over 2 million U.S. jobs being supported by exports to Canada and Mexico. And those jobs have increased in value, too—real manufacturing compensation per hour has increased 19 percent since the passage of NAFTA.

NAFTA has provided much more good than harm. It shouldn’t be gutted.

A lot has changed since NAFTA was passed in the mid-90s, however, and there is scope for improvement and modernization. Major advancements in technology have radically altered the way business is conducted. Barriers such as bans on cross-border data flows, efforts to mandate the use of domestic servers, and unnecessary data storage requirements interfere with digitally traded goods. Google, Netflix, and other tech giants didn’t even exist in 1994. Mexico’s energy sector, excluded from NAFTA, has since been liberalized.

NAFTA needs to be updated to take these new realities into account.

But we mustn’t lose sight of the big picture. Since NAFTA, American manufacturing has been firing on all cylinders. Policymakers should improve NAFTA and make it easier for manufacturers to trade, not reverse the achievements of the last 25 years.