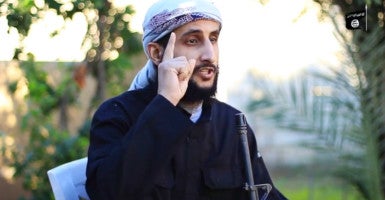 The Islamic State is likely taking a dangerous new tack in its war on all those who disagree with it.

While there is much we still do not know about the terrorist attacks in Paris, the information trickling out indicates that the Islamic State of Iraq and Syria (ISIS), which has claimed responsibility, is in the midst of trying a new approach: sending fighters out from the state it has created in the Middle East to participate in terrorist attacks.

The sophistication of Friday’s massacre, which resulted in 132 dead and thousands more injured, suggests that the attackers were supported by an extensive network and that some of them had received advanced training. Eight terrorists struck six different sites nearly simultaneously. They were well armed, with automatic rifles and possibly grenades, and most wore suicide bomb belts. Eyewitnesses recount watching the shooters fire and reload with deliberateness and precision.

If early reports are correct, it appears that at least one of the attackers traveled abroad to fight for ISIS before returning to Europe to plug into a terror network there. Another traveled to Turkey, a common transit point for fighters joining ISIS, though the Turks have no record of him leaving their country. France believes that the mastermind is a man named Abdelhamid Abaaoud, a Belgian who has fought for ISIS in Syria and who authorities believe may now be back in Europe. Similarly, a horrific double suicide bombing in Beirut, Lebanon, a day before the Paris attack may have been perpetrated by ISIS fighters who traveled from Syria.

If Abaaoud or one or more of the attackers were returnees, as seems likely, it is reasonable to assume they taught the other attackers the weapons skills victims noticed. This model of combining homegrown terrorists with returned fighters is a serious challenge for counterterrorism officials. One or two returnees slipping back into Europe or elsewhere are more difficult to detect than a larger group, yet they can train homegrown terrorists and significantly increase their effectiveness.

Until last week, ISIS was trying to import, not export, fighters.

If the Beirut and Paris attacks were indeed perpetrated at least in part by returned ISIS fighters, it represents a significant departure from ISIS’ usual approach. It frequently encourages attacks in the West and elsewhere but has never dispatched terrorists to carry one out. Instead, it has tried to provoke lone wolf attacks—violence perpetrated by people inspired by ISIS’ ideology, but without formal links to the organization.

ISIS’ focus has rather been on attracting terrorists to the lands it has seized in Syria and Iraq. ISIS’ central boast is that it has revived the caliphate founded by the Prophet Muhammad, but it needs citizens to grow this so-called Islamic State.

Until last week, ISIS was trying to import, not export, fighters. In the first edition of its online magazine, it advertised for doctors, engineers, and others to travel to the caliphate and frequently claims that Muslims are obligated to emigrate there. There are online videos of ISIS terrorists burning their passports in a show of commitment to remaining in the Islamic State.

There are several possible explanations for ISIS’ potential new tack. It frequently describes its expansion and battlefield success as inevitable and ordained by Allah, and boasts that its black flag will one day fly over all of Earth. Recently, however, its battlefield expansion has bogged down, and even reversed in a number of places. The Paris and Beirut attacks may have been designed to assure its followers and potential recruits that the caliphate is still advancing and the apocalypse approaching.

ISIS might also be trying to hasten the apocalypse. According to ISIS’ end-times delusions, the armies of Rome will meet the armies of the caliphate in Dabiq, a town in northwestern Syria. Dabiq is so central to ISIS’ theological worldview that it named its flagship publication after it. Thus far, however, ISIS has failed to provoke an invasion from the armies of Rome (any infidel country can serve in Rome’s stead, according to some ISIS interpretations of the prophecy). ISIS may have calculated that a massive attack in the heart of France will force it and its allies to commit ground troops, precipitating the cataclysmic final battle for which it yearns.

The Paris and Beirut attacks may have been designed to assure its followers and potential recruits that the caliphate is still advancing and the apocalypse approaching.

Finally, the attacks were revenge and a warning to ISIS’ foes. Hezbollah, the Iranian-backed terrorist organization that has a strong presence in the area where the Beirut bombings occurred, is fighting ISIS in Syria. France is part of the coalition bombing ISIS, and while the air campaign alone cannot roll the group back, it is imposing a cost. In its statement claiming responsibility, ISIS threatened all countries participating in the air war against it. In a video released Monday, it specifically threatened Washington, D.C., and Europe with further carnage, apparently hoping the Paris attacks have cowed the West.

While we do not yet fully understand all of ISIS’ motivations for its latest atrocity, it does appear that it has taken a dangerous new tack that should serve as yet another warning that containment is not a realistic strategy. As a Heritage Foundation report warned in 2011, complacency, incrementalism, and obtuseness have dogged the fight against global terrorism for too long. The Paris and Beirut attacks are as clear a signal as possible that it is time to take the fight to ISIS in earnest.