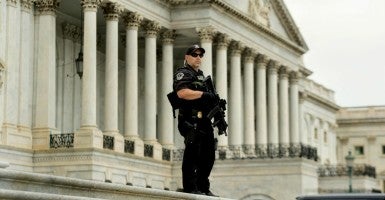 A member of the U.S. Capitol Police stands on the steps outside the House of Representatives, on Capitol Hill in Washington. (Photo: Michael Reynolds/EPA/Newscom)

The Washington Post reports a social networking site related to Daesh, the Islamist terrorist group in Syria-Iraq also known as ISIS, has released a video threatening a terrorist strike on Washington, D.C.

It is no surprise ISIS would make such an announcement through social networking – online activities are a key part of their global strategy.

After the coordinated attacks in Paris, this raises a number of troubling concerns about the prospects of another major attack on American soil.

Q: Is Washington, D.C. more at risk because of the recent ISIS video?

A: No. ISIS has made specific threats against the United States before without success. That is cold comfort, however, as the U.S. has long been, and remains a main target for transnational terrorism.

There have been at least 74 known Islamist plots aimed at the United States since 9/11. The frequency of those plots has increased in recent years, as have the numbers linked to or inspired by ISIS.

Further, the U.S. should expect ISIS to continue to try and pull-off attacks against the U.S. – successful attacks against Western powers are crucial to the ISIS narrative that it is the energizing core of the global Islamist insurgency.

A: Of course the Paris attacks could happen here. The amount of resources needed to undertake a similar kind of attack is modest and not out of reach for any terrorist group.

The attack in Paris was a “weapon of mass disruption,” combining several different kinds terror activity (mass shootings, bombings, and suicide attacks) in one coordinated effort to maximize casualties and mayhem, while grabbing global attention.

The best prevention is good counterterrorism operations that identify, infiltrate, and disrupt plots before blood runs on the street.

That is why it is vital that these programs be robust and professional. In particular, the government must ensure that “unbiased, unvarnished assessments” are getting to decision-makers. Washington must address the inconvenient truth that transnational terrorism is a growing concern.

Q: Should the U.S. be concerned about foreign-fighters coming to our shores hidden among Middle Eastern refugees?

A: The government needs to focus on “terrorist travel,” finding and disrupting how groups like ISIS and al-Qaeda attempt to move assets rather than particular groups.

The U.S. has seen it all—homegrown terrorists, refugees, and legal international travel. What we need from Washington is due diligence in how they process all of these.

When it comes to refugees, the administration has an obligation to conduct a substantive risk assessment, fully consult with Congress and follow the law, and thoroughly vet refugee applicants.

Q: Should the U.S. join France in declaring war on ISIS?

A: The United States has been in armed conflict with Islamist terrorists for over a decade. While the president claims he is ending wars and has finished the global war on terrorism, the truth is that these claims are rhetoric, not reality.

For some time, the administration and Congress have debated the need for an additional Authorization for the Use of Military Force (AUMF). While there are many issues here to be addressed, what is most important to recognize is that the administration lacks a coherent strategy to deal with the threat.

The administration’s counterterrorism strategy has been an abject failure.

A: If you only play defense eventually the other team is going to score. Transnational Islamist terrorism is a serious threat that requires a serious response.

Breaking ISIS territorial control over Iraq has to be a key component of a comprehensive strategy to defend America. That has to be paired with a plan to win the war of ideas against radical Islam. These initiatives should be the focus of American effort, rather than distracting and disruptive “political machinations,” like the administration’s wrong-headed initiative to close the terrorist detention facility at Guantanamo Bay.