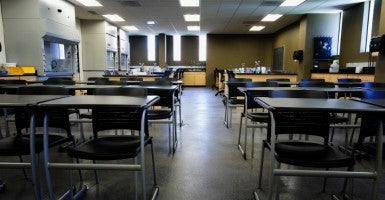 House and Senate proposals to rewrite No Child Left Behind are set to head into conference early next week, and details about an agreement struck between House and Senate offices have begun to emerge.

As expected, the proposal adopts many of the priorities of Senate policymakers, further weakening any efforts to limit federal intervention in local school policy. The National Education Association and the Center for American Progress expressed cautious optimism about the emerging details.

The proposed rewrite appears to maintain high levels of federal intervention in local school policy, including:

Although there appears to be a modest consolidation of small competitive grant programs, such as the federal P.E. program and Advanced Placement subsidies program, the new programs that appear to be part of the agreement overwhelm what limited program consolidation seems likely.

Notably, Education Week reports that the agreement will contain a new preschool program, to be housed over at the Department of Health and Human Services (which currently manages Head Start), and will be jointly administered by the Department of Education.

The federal government already operates 45 federal preschool and grant programs, totaling some $20 billion annually. The administration, along with Senate policymakers such as Patty Murray, D-Wash., have been pushing for an increase in federal preschool programs and spending.

The new preschool push comes on the heels of an evaluation of the highly touted Tennessee Voluntary Pre-K program by Vanderbilt, which found that students who participated in the state preschool program actually did worse than the control group of students who did not participate. And it comes after a half-century of documented failure of the federal Head Start program.

Russ Whitehurst of Brookings has repeatedly noted how policymakers must proceed with caution on government preschool programs, as evidence is mounting that they have no impact on participants (or some negative impacts).

In addition to the new preschool program, Education Week also reports that there will be a new “innovation” program and a new wrap-around after school services program. The proposal will also maintain the 21st Century Community Schools Program, which already offers after-school programs, to the tune of $1.1 billion annually.

Since they were first introduced, the proposals to reauthorize the Elementary and Secondary Education Act (currently known as No Child Left Behind) have been missed opportunities to restore state and local control of education.

And as reports have it, this compromise proposal incorporating aspects of both the House and Senate versions also leaves any Title I (No Child Left Behind funding for students in low-income districts) portability on the cutting room floor.

Finally, as Neal McCluskey over at Cato points out, the proposal is expected to be highly convoluted. “This is a big problem,” McCluskey writes. “Not only is complicated legislation inaccessible to the public, it can enable ambitious executives to exploit impenetrability and essentially write law through regulation.”

Details about the proposal that will head into conference suggest that, as was the case prior to conference, the proposal fails to adequately limit federal intervention in education and does not put policy on a path toward restoring state and local control of education. The agreement fails to offer options to empower parents, such as enabling states to make their Title I dollars portable to public and private schools of choice.

Policymakers should empower states to completely exit the 600-page law in order to begin the process of devolving education authority back to states and localities and, ultimately, families.